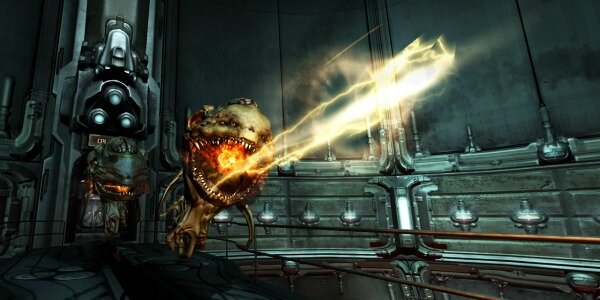 id Software producer Eric Webb believes Doom 3: BFG Edition has the best 3D implementation ever seen in a videogame, one with the potential of “sucking” gamers into the experience like no other game has been able to.

“We were really surprised when we first had a look at it in 3D,” Webb explained. “John [Carmack, co-creator of the Doom series] went through quite a few different iterations of the game to help us figure out how best to fit the technology in. Just like adding DualShock 3 controls to the original Doom, 3D really brings Doom 3 to life.

It’s interesting when you’re playing; you almost lose all of your peripheral vision and get sucked into the experience. I’d go so far as to say it’s the best implementation of stereoscopic 3D I’ve seen in a game so far. It really does draw you in.”

Webb also made known that Doom and Doom 2. also included in the Doom 3 BFG package, will run at 60 frames per seconds (FPS), even in multiplayer.

“They are pretty much straight ports, but I will say that they run really fast at 60 frames per second, even with four-player split screen play going on,” he said. “If you’ve got a big TV that’s really going to stand out. The guys basically wrote it from scratch to get it working on PS3.”

Previous: Quenchables: Activision Believes Wii U Has A Lot Of Potential
Next: Weekend Quencher 06/22/12 – While We Wait