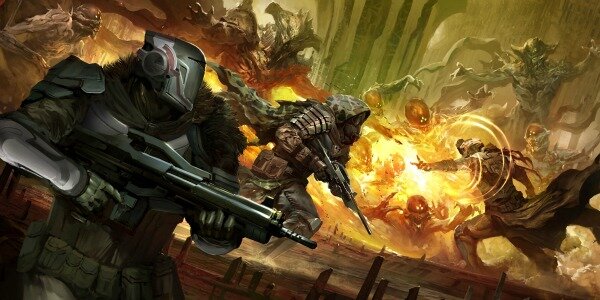 Yesterday Bungie revealed in earnest Destiny, it’s first-person shooter that’s not exactly fitted in the genre’s constraints, one that needs to always be connected to the internet in order to work, and it’s a game that’s coming to PS3, Xbox 360 and, as Bungie cautiously puts it, “future-generation technology”.

Speaking at a press event at Bungie’s Bellevue, Washington office last week, COO Pete Parsons said: “It’s a persistent, shared and connected world, so you will need to be connected [to the internet] to play Destiny.”

The game is is built around co-operative play and includes elements familiar to the massively multiplayer online genre, such as a persistent world, areas packed with players and quests designed to challenge sizable groups.

“We’re absolutely going to be on this generation of consoles,” Parsons said. “When we came to the big collaboration with Activision we said we’re going to tell these adventures over a 10-year period, so we need to make sure we’re prepared for the future, both in upcoming generations and multiple platforms and devices themselves.”

The Destiny experience will make it onto mobile devices in some manner, however Parsons didn’t elaborate, except to say gamers will be able to do “meaningful things”.

His statement contradicts that of an old contract signed two years ago between Activision and Microsoft, which stated that the game would first come to the firm’s next-gen Xbox. But paying attention to the duration of time, and the game’s delay, the contract seems to have been amended.

Also, it’s unlikely that the game will be released this year as Activision, in its recent investors call, made no mention of the title, and in its guidance, did not include profits forthcoming from the Bungie game, indirectly making known that Destiny will be released in 2014 instead.

We’ll have another thread up soon, one including much more details on the game.

You can do this with the Vita right? What's so special about it?...

Nice job Platinum Games, you guys deserve every bit of profit you guys are making....

nife aricle but the dmographics changed significantly with thevadvent of casual gaming. You make the point of ...

This game was amazingly fun. Just wish it was a bit longer. I have yet to buy The Darkness 2. Also the mult...