The War Z Announced for PC

Published on August 1, 2012, by Martin Zamora - Posted in Arktos Entertainment 7 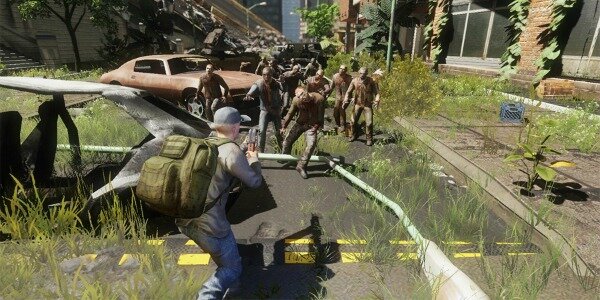 I’m sure most of you have heard of the mod Day Z for army-simulation game ArmA II, ever since its release back in April thousands of gamers have flocked to play this realistic take on living in the zombie apocalypse. The War Z plans to take the concepts introduced in Day Z and expand them to even larger scales.

Developed by Hammerpoint Interactive since last year, The War Z is a free-to-play MMORPG set five years after a zombie outbreak has ravaged the Earth. In the game you play as a survivor (you can create up to five) who has to endure the new zombie devastated world. As opposed to traditional MMOs there are no set classes or levels, and instead you will be able to choose between dozens of skills that will tailor your play style. In order to get these skills you will need to gain experience through completing quests. Completing quests will also net you superior equipment in the form of gear and weapons.

Like MMOs it will have a focus upon social interactions between players. You will be able to create groups with players in order to increase your odds of survival, and barter items with other players. Keep in mind that these other players can also be larger threats than the zombies, as players can murder you to loot your body. For example one developer posted that he needed a vaccine in exchange for an assault rifle, the player who responded to his post ended up killing the developer for his loot. Players will be able to create content for other players too, including quests and notes. Social hubs will be present in the form of safe havens, these areas provide protection from zombies, in addition to stores where you can buy items, and a post office to transfer items to other players.

One of the primary goals of the developers is to make you feel immersed in the atmosphere. To do this they introduced scavenging for items like food, water, and medical supplies. You will even need to sleep to restore stamina. If you’re bitten by a zombie your blood will become infected, starting a race against the clock where you have to find or barter for a zombie virus vaccine – one of the rarest items in the game. There is a strong emphasis on exploration, through exploring survivors can find special items and also written records of past survivors called “memories” so you can piece together how individuals reacted to the apocalypse.

To assist in the immersion aspects of the game, the maps that will be featured are based on real world locales like Paris and New York. For example the first map available to transverse will be ‘Colorado,’ and will have geography based on the state. These maps are also extremely large, featuring four hundred square kilometers per game world. There will also be a day/night cycle, each a few hours of real world time. In some areas of the maps there will be higher populations of zombies than others, for example in cities there will be hundreds, while in the country zombies will be more dispersed.

There will be two modes of play, hardcore and normal. Hardcore mode is comparable to Day Z in which if your character dies, they will be dead permanently, forcing you to restart from the beginning with a new character. As an incentive to players, there will be rare items only found on hardcore servers. In normal mode, if you die your personal inventory will be inaccessible for a certain amount of time.

The game is set to release later this year with a beta being released in the Fall for $30. If you’re interested in being a part of the beta sign-up here. You will also get guaranteed beta access and three additional guest codes if you pre-order the game. Are there any PC players excited for the game? I would love to have someone who could watch my back while we explore the despair ridden environment!

7 Comments on "The War Z Announced for PC"

@Christos What did you think of the original ending of Mass Effect 3? (I'm assuming you played it since you sa...

I prefer Battlefield 3, on the PC it's nothing shot of amazing, especially when you have a PC that can run it ...

battlefield 2 is what i played and still do...

None of these games can touch Killzone 3 in technicality, and pure action. It's also the most visually-stunni...

eventually, they are become stale and very fast. Something will come just like the military shooter did to twi...

Do I want to spend money for this DLC? Well I know this will NOT help my chances against the Reapers so why bo...

SWEET....a great excuse to dust of MGS4 and play through it again....