The Game Crashes Your Console From Time To Time

Will the reimagined version of the 1993 classic hold?

The Syndicate CO-OP Demo released a few days ago and has been advertised on Xbox360 and PS3 constantly with the giveaway EA is doing. Ignoring the giveaway, I downloaded the demo and played it a few times with an online friend of mine.

The back story of Syndicate is that it is supposed to be a reimagined version of the 1993 classic Syndicate produced by BullFrog Games and produced by EA. Originally made for the Commodore Amiga and PC. The DOS version was unique in that it did not use 320×240 256 color mode, rather a higher resolution mode with only 16 colors. The higher resolution permitted finer detail in the graphics and allowed for the illusion that more than 16 colors were used by means of dithering. Similar graphics and same levels design were used in Macintosh, 3DO, Atari Jaguar and Acorn RiscPC ports.

A separate version was made for the simpler, 16-bit consoles, as the hardware couldn’t support the complexity of the original game. It contained completely new level design and different graphics, and was released for Sega Mega Drive and SNES. Later, it was released on the PlayStation Portable as part of EA Replay, a compilation of retro games released in the United States on November 7, 2006; this version is really the SNES version and is executed on PSP by an emulator.

The image above shows the game back then. For this review I’ve played the original on an emulator and this is how I think the game felt.

Game play involves ordering a four-person team of cyborg agents around cities displayed in a fixed-view isometric style, in pursuit of mission goals such as assassinating executives of a rival syndicate, rescuing captured allies, “persuading” civilians and scientists to join the player’s company or simply killing all enemy agents.

As the player progresses through the game, they must manage the research and development of new weaponry and cyborg upgrades. The player has only limited funds, requiring taxation of the conquered territories while ensuring that they are not so over-taxed that they revolt against the player. The player begins the game with simple pistols, progressing through increasingly destructive weaponry that includes Uzis, miniguns, flamethrowers, sniper rifles, time bombs, lasers and the enormously destructive Gauss gun (a rocket launcher). In addition, the player can use items such as medikits to heal his agents, scanners to locate pedestrians/vehicles and the “Persuadertron” to brainwash the player’s targets into blind obedience

The picture above shows the revamped version of the title. I’ve downloaded and played both Xbox360 and PS3 versions of the game to see if they’re any if at all minute changes. BullFrog Games, however, will not be creating this remake. A new studio called Starbreeze Studios will be taking over with EA‘s publishing help.

The plot behind the game takes place in 2069. No longer governed by politicians, the developed world is divided up into regions controlled by mega-corporations known as syndicates. These syndicates have revolutionized how the consumer interacts with the digital world. Since the consumer requires a device to access the world’s data and control technology, they can do this in the blink of an eye via neural chip implant.

Civilians flocked to be “Chip’d” and enjoy all that their selected syndicate has to offer: housing, medical, banking, insurance, education, entertainment and jobs. One complete package. One complete lifestyle. In return, the syndicates gained unprecedented insights, and control, over the individual and their behavior. With little government oversight, business has become war. The syndicates will stop at nothing for ultimate market dominance.

At the first line of this war are the agents, the syndicate’s bio-engineered and chip-augmented enforcers. They can breach anything in the wired dataverse, including their enemies, their weapons and the environment that surrounds them, making them the most efficient and deadly technological weapons in the world. Take on the role of Miles Kilo, EuroCorp’s latest prototype agent, and embark on a brutal action adventure of corruption and revenge.

Players are not limited to the weapons in their hands. Through the DART 6 bio-chip technology implanted in their head, players can slow down time and breach the digital world around them to take down their foes using a variety of upgradable hacking mechanics.

Syndicate gives you the clean Sci-Fi world experience like Deus Ex: Human Revolution and Mass Effect while giving you the motion flow of the KillZone franchise, shooter gameplay like the Crysis series and with beautiful sound effects from Battlefield 3.
Sounds impossible right? I guess not. To be honest, it’s nothing we haven’t seen before.

The game is very heavy on CO-OP. In the menu screen and in the pre-game lobby, the game recommends having at LEAST three others to help you, the game is that difficult, so it proclaims. The game wasn’t lying. Myself and my online friend Dan played countless hours trying to beat the only level the demo gives us which is Western Europe. The difficulty’s are normal and hard, pretty standard. On NORMAL, the game recommends four player co-op but we didn’t listen.

The game uses a breaching system, which means, a click of a button you can be hacking doors open, healing your squad mates, or psychologically turning the enemies brains to mush. It’s an interesting system.

On Normal the game causes a challenge. For my friend and I, we constantly had to stop shooting the other syndicates (not very smart) and turn towards each other to heal one another.

The game, all in all doesn’t have many cons. These factors might attribute that it’s still only a demo but, on some occasions you will have to compensate for lag when moving left, right, climbing, or descending. This might be because my friend and I have the old Xbox360 Pro verison and Fat PS3′s but, the game will crash every once in awhile, nothing to hindering but it does get annoying when you kill a Class level 6 immune Syndicate and you’re going to go replenish your ammo supply then BANG, the game crashes your system. 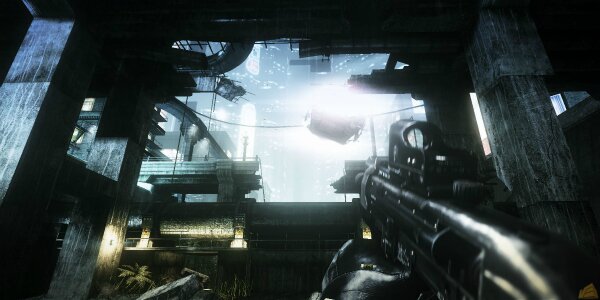 All in all, I’m really excited for this game. If you haven’t downloaded the Demo on either console or PC, you really should, It’s FREE and everyone loves free stuff. The game does support four player Co-Op but one other person will suffice. If you want a familiar but new experience, I would give this game a go. The game is challenging but not impossible.