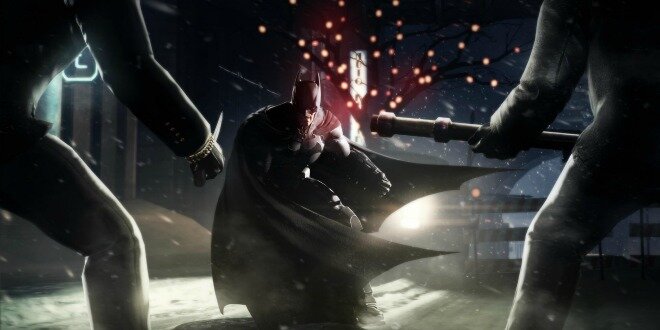 Well, maybe not all but there’s certainly a good amount of useful details in this latest Batman: Arkham Origins leak. Quench your thirst below the break.

- Origins’ Batman is version 0.9 as opposed to Arkham City’s 5.0 Batman
- Warner Bros. Montreal feels it has made the coolest version of Deathstroke we’ve seen in media
- Important to make Batman scary again
- Thugs will show that they’re in awe of Batman and debate whether or not he’s human
- The team considered implementing robotic drones, but were cut since they didn’t want players involved with having to be defensive at all times during predator sections
- Gusts of wind from the dynamic weather system was considered as well, which saw thugs standing still and covering their eyes
- Idea was cut since it was difficult to control Batman
- Batman is impulsive, overconfident as he still has to encounter an opponent on par with his strength
- Batman is also clever, but doesn’t think of everything
- Ex: when interrogating a thug he can be dominated by violence and stun the thug before getting the information he wanted
- Batman will be affected psychologically by major difficulties he encounters during the game
- This changes him into the more realist and stoic Batman from the previous games
- Rupert Thorne is mentioned (as well as Falcone)
- Some of the 8 assassins will be side missions, and we will not be finished with them from the first encounter
- Unlock the location for the Batwing through an entire side mission
- For the mission, an unknown hacker has jammed the radio system and Batman needs to restore it
- New combat move: Batman can rush toward an enemy while knocking another one on his path
- Freeze boss fight from Arkham City is the main model for Origins boss fights
- According to NAG, Kevin Conroy will not be reprising his role as the Dark Knight in order to fit this younger version

See, that’s news you can use right there. Especially if you’re fan of the Batman games from Rocksteady. The latest effort is being handled by Warner Bros. Montreal, by the way. It’s out October 25th, 2013.