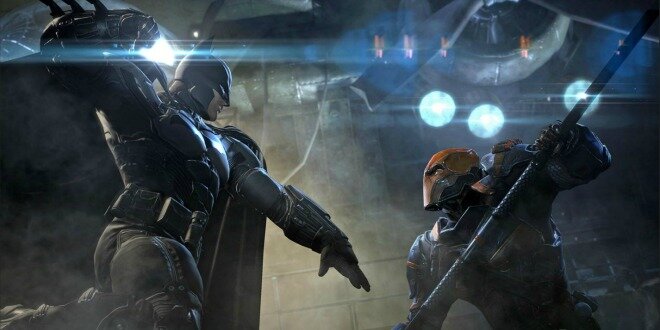 Warner Bros. has officially announced Batman: Arkham Origins and Blackgate, the second being a spinoff of the main game on PS Vita and Nintendo 3DS. There’s a trailer and tons of details inside.

Batman: Arkham Origins takes place before the events of the first two games by developer Rocksteady, and sees Batman having encounters with his many foes for the first time.

The PS Vita and 3DS version is called Batman: Origins Blackgate from Armature Studio, and will be released alongside the console and PC versions.

- Takes place on Christmas Eve
- Years before the previous two games
- Mob boss Black Mask will give a fortune for Batman’s head
- Top assassins and supervillains from the DC Comics universe are out to get Batman
- Cops on the take from the mob join the manhunt as well
- Batman needs to outsmart his enemies, find out why Black Mask wants him dead, and prove to what good cops that he’s on their side

- Porting Arkham City to Wii U let the team get familiar with Unreal 3
- Doing a prequel lets the team carve a unique territory if Rockstar were to move the Arkham timeline ahead down the road
- Rocksteady’s project is tightly under wraps
- Younger Batman also “gives us the opportunity to refresh things a bit”
- Combat system still in place
- Will have “new layers, new opportunities, and new tactics”
- New enemy types
- Batman not as finely honed as in the previous games
- Won’t control the Batwing directly
- Batwing will figure into story sequences and acts as a universe-appropriate form of fast travel
- Has the traditional predator mode in which players swing from perch to perch, glide kick, string guys upside-down, etc.
- New remote claw that is like the grappler in Just Cause 2
- Batman targets two objects and fires out a claw
- This hooks into the first object and launches another claw and rope to the second object
- Can then pull the two objects together
- Use this to knock enemies together, slam heavy objects into foes, string objects or people under a perch
- Can string up an explosive barrel under a perch, lure enemies with a sonic batarang, then cut the rope with a normal batarang, dropping the explosive on their heads
- Team knows Black Mask isn’t the most popular villain
- Old Gotham is only half of the game world
- Another new entire is across the bridge called New Gotham
- New Gotham is classier and has much taller skyscrapers
- New zone doubles the size of the game world
- Players can dismantle the hacked tower network
- Towers emit a jamming signal that prevents the Batwing from flying into the area, meaning no fast travel
- It also halts Batman’s sensors from placing points of interest on the map
- Taking down the towers are varied and require all of Batman’s navigation, puzzle solving, and combat skills
- Some can be taken down quickly, others must be returned to later with an upgrade
- “Crime in Progress”: ex – saving some cops from a group of thugs, rescuing a snitch from being tossed off a roof
- Activities give Batman a chance for experience point bonuses
- Completing side quests also contributes to the GCPD’s understanding and appreciation of Batman
- They will begin to know Batman and which side he stands on based on how much you take on the optional missions
- Most Wanted system gives players a chance to go after villains outside of the core storyline
- These optional side missions can be tackled when you discover them
- Many optional missions offer upgrades
- Batman’s butler Alfred may notice that he had a tough time in that situation and give him a new gadget
- Dark Knight system is slightly more behind the scenes, though it’s still important
- Dark Knight system provides a lengthy string of tasks that slowly goes up in difficulty as the game progresses
- The team wants to avoid boring tutorials while still training players to be masters of predator and combat systems
- Complete a certain number of counters or silent takedowns to receive XP rewards or a specific upgrade
- Dark Knight system doesn’t replace challenge mode
- Team wants to make challenges more meaningful

- Takes place about an hour into the game
- Batman is perched above Jezebel plaza
- Black Mask’s assassins have stirred up the local thugs
- No towering walls keeping villains in check and many citizens call Arkham City home since there isn’t a prison
- Amusement Mile hasn’t been flooded
- Batman is looking to find out why Black Mask is trying to kill him
- Batman decides to go to the party to track down Penguin, who hears about everything
- Eventually, Penguin gives some intel on a murder at Lacey Towers
- Claw grips Batman’s ankle and drags him out of the room before he can finish his questioning
- Batman reaches for the door, but his arm is stomped by a mysterious figure
- Batman ends up suspended upside-down from the rafters
- Deathstroke circles Batman with a drawn sword
- Batman blocks and disarms Deathstroke, using the sword to cut himself free
- Thanks to Penguin’s tip, Batman goes to Lacey Towers
- The cops say it’s a double homicide
- One victim is supposedly Black Mask
- Inside the apartment, Batman sees Black Mask’s girlfriend strung up on a chandelier
- Black Mask’s assumed body is laying face up across the room
- Batman goes into first-person detective vision to examine the situation

Developed by WB Games Montréal, Batman: Arkham Origins features an expanded Gotham City and introduces an original prequel storyline set several years before the events of Batman: Arkham Asylum and Batman: Arkham City, the first two critically acclaimed games of the franchise. Taking place before the rise of Gotham City’s most dangerous criminals, the game showcases a young and unrefined Batman as he faces a defining moment in his early career as a crime fighter that sets his path to becoming the Dark Knight. As the story unfolds, players will meet many important characters for the first time and forge key relationships.

Batman: Arkham Origins Blackgate is a 2.5-D game developed by Armature Studio that brings the Batman Arkham experience for the first time to Nintendo and Sony handheld systems. A companion game to Batman: Arkham Origins, players can continue the storyline of the console version and discover more details of the Dark Knight’s past.

“WB Games Montréal is honoured to have the opportunity to create Batman: Arkham Origins, a new chapter in this amazing franchise” said Reid Schneider, Vice President and Executive Producer, WB Games Montréal. “We are huge fans of the franchise and are committed to creating an experience that offers players more of what they love, as well as the chance to play as a younger Batman within a fresh storyline and expanded world.”

Previous: Next Xbox Won’t Be Backwards Compatible
Next: The Difference Between PS4 And A High-End PC According to Guerrilla Games

Far Cry 3: Blood Dragon Is A Standalone Title Due May 1st, Screenshots Released

Another Arkham Game Confirmed To Release This Year