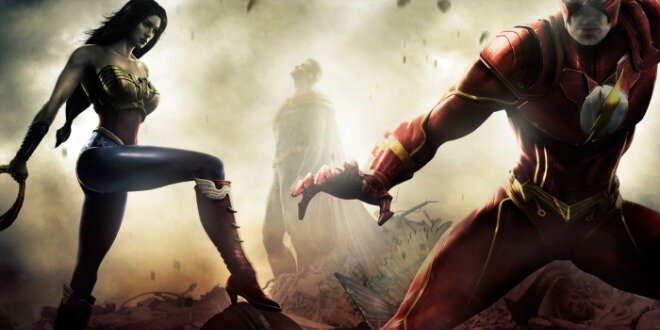 Injustice: Gods Among Us demo impressions

NetherRealm’s latest game’s demo is now live on Xbox LIVE, US PS Store, and EU PS Store tomorrow. Injustice: Gods Among Us involves Joker tricking Superman killing a pregnant Lois Lane, and then Batman having to beat Superman up because he’s becoming obsessed with power. The two heroes form “posses”, explaining why everyone is against everyone in every trailer. Sinister, comic plot, with a very gritty setting and mood. And I don’t know if the plot turns out well, but I’m definitely sure the gameplay will raise the bar.

Coming from the creators of Mortal Kombat, the demo (~570MB) offers us 3 playable characters: Batman, Wonder Woman and Lex Luthor. I played Batman over and over, not only because he’s among my top favorite DC characters, but also because his moveset was more fitting my style. The Caped Crusader uses his batarangs so fluently in his combos that makes me wonder, how will Green Lantern, Deathstroke and the Joker incorporate their gadgetry in their moves? If it’s done in the same vein as Batman, I can only guess it will be hard to pick my main character once the game arrives home in April 19. What was sad though, is that the demo only offered one stage — the rooftop housing Batman’s calling sign.

What was very refreshing and interesting was that you could interact with the environment, even mid-combo. Kicking Lex to a helicopter after I landed some punches on him, and them having him bounce back to me only to continue the carnage, was such a fun moment, one that’s very common in Injustice, and spices up the traditional 2D fighting gameplay, giving us some exciting ways to confuse our opponent and break up the pace.

Then, we have the flashy Power Moves. Batman, for example, beat up the enemy bad, and for the cherry on the pie, called his Batmobile to run over them, him jumping over it with a graceful backflip. While not finishing the enemy off immediately, it bit a nice chunk off their health (around 1/4).

Between rounds, there’s no “round 2″ announcements, or text — you just continue playing, all combatants starting out with 2 bars of health for this very reason, and each time a bar is depleted, there’s a brief computer-controlled moment where the round winner taunts the enemy. Another nice touch, breaking away from the fighting genre norm. Also, instead of going through the “ladder” with pictures of the fighters and their names, you go through a… “corridor”, I guess, with every combatant looking your way, with your combatant looking their way.

The graphics were fantastic, as well as the effects, and everything played fluidly — sometimes, I had crazy things going on fast on the screen at once, and not a single frame dropped, at least visibly. Only problem I had, a couple of times (in around 1 and a half hour of play), the sound cut off for some seconds, and then came back. Nothing tragic, still though, takes away from the immersion. The control layout is standard, and before even looking at the controls, I managed to win a 2-round battle on Medium difficulty while pumping out combos, just because I guessed what each button did, and that says a lot.

Lastly, the demo offers an offline Versus mode, which I didn’t really try out. The full game bursts with content though; multiple online modes, arcade ladder, S.T.A.R. Labs missions, together with a lengthy, interesting campaign. Mortal Kombat’s creators’ game plays, and looks, a lot like Mortal Kombat (2o11 reboot), but that’s not necessarily a bad thing. What remains to be seen is if the hype surrounding the game will be justified, or if it will fail to deliver. One thing is certain, though: the DC universe is coming back in gaming, in full force.

Tagged with: injustice gods among us preview Injustice: Gods Among Us netherrealm studios Preview

Previous: Grand Theft Auto V official box art revealed!
Next: GameStop: The World Will Stand Up And Take Notice When Next Xbox Is Revealed