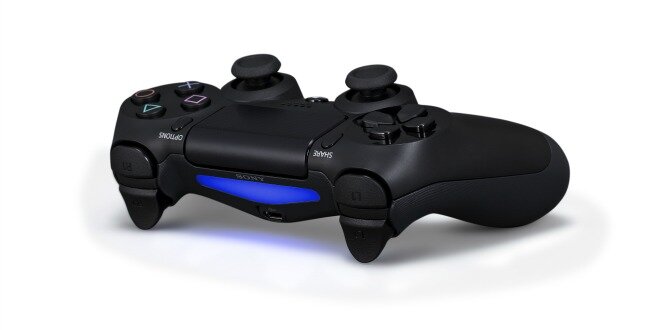 DualShock 4 Hands On: Gamers Should Be Excited For PS4

GameInformer went hands on with DualShock 4, and the magazine’s conclusion tells gamers to be excited about Sony’s latest console. Find details on the hands on experience below the break.

- Deadzone on the analog sticks has been greatly reduced.

- Thumbs bumping into each other is no longer an issue, the analog sticks are spaced farther apart.

- Analog sticks have a ridged concave top that prevent your thumbs from slipping off.

- Stuck with symmetrical design because the assymetrical design would cause more dificulties to interact with the touchpad without unintentionally bumping into the left stick.

- Ridge at the end of the triggers grasps at your fingers instead of letting them slide off.

- There is a small speaker above the ps button, below the touchpad.

- Lightbar works in conjunction with the ps4 eye to track your position and adjusts the split screen accordingly.

- Got input from Bungie (and a bunch of first party studios) for designing the DS4, Bungie really wanted to make it a controller that worked great for fps games.

- Writer of the article says the controller is a big reason for gamers to be excited for the console.

Previous: EA On Sim City: We Learned Our Lesson
Next: Both Sony And Microsoft Are Embracing Free-To-Play Model