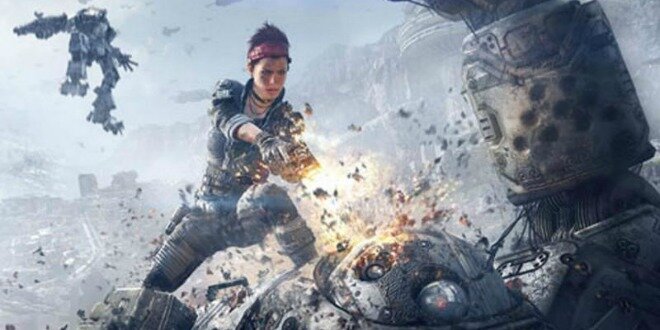 GameInformer Magazine has had a massive slip up on Google play, as a NeoGAF user registered for the magazine and immediately the publication’s July issue downloaded, prematurely revealing Respawn Entertainment’s new game.

The game is named Titan Fall, uses the cloud a lot, and will only be released on Xbox One, PC and Xbox 360. Screenshot of the magazine’s July cover can be found below.

Titan Fall is being published by EA, a company that’s confirmed to be in a strategic partnership with Microsoft and its new console, Xbox One. This is big.

“Xbox One and PC. With a 360 version being developed by someone else. Game uses cloud a bunch apparently,” NeoGAF user Cartman 99, who spotted the leak said.

According to information provided to Kotaku last month, Titanfall is a “Sci-fi multiplayer combat with agile, lethal mech suits.”

The new game from Respawn is a futuristic multiplayer-centric online shooter, one of our sources says. The source describes the game as a battle of Davids and Goliaths. The Davids are heavily-armed foot soldiers. The Goliaths are the giant exosekeltons—Titans—that these soldiers can pilot. These Titans are big mech-style walkers that move with an agility not seen in games like Mechwarrior or Steel Battalions.

To keep the action balanced, game maps limit the number of Titans that can be used in a skirmish. Weapon loadouts for the foot soldiers are designed to ensure that the characters on foot can take out the Titans if need be.

This is a big leak, one GameInformer must be reeling over now, but the bigger news here is the exclusive nature of the game. Remember these guys are the same people who crafted Call of Duty: Modern Warfare, so it’ll be interesting to see what they were able to create with Titanfall.

More as it happens.

Previous: Nintendo Should Release Its Games On All Platforms
Next: Titanfall Exclusive To Xbox One, Xbox 360 and PC Because Respawn Team Is Small

Rise of the Tomb Raider Is An Xbox One Exclusive