Nostalgia is a many splendored thing. Many of us now in college or even older hark back to a time where boops and beeps reigned supreme, where arcade high scores were that era’s trophies and achievements, and where gaming was just much simpler. Atlus and From Software have teamed up to recreate such a game for current-gen hardware, 3D Dot Game Heroes. While it borrows heavily from a certain Nintendo franchise featuring a mythical princess and a triforce, 3D Dot Game Heroes offers a unique twist on the Zelda formula. What the game lacks in originality, it makes up for in sheer fun and charm.

The kingdom of Dotnia is in serious need of a hero. Legends tell of a young warrior who gathered the six fabled orbs to vanquish an ancient evil, sealing it inside the dark orb. It is many eons later, and a new evil has arisen, stealing the dark orb. It is up to your custom hero to seek aid of the six sages, conquer foe and beast alike, and reclaim the six orbs to take the fight back to the sinister Fuelle. It’s nothing we haven’t see before, but the simple story works. There’s numerous game references and humor thrown in to keep what small amount of story there is fresh.

As you begin the game, you’re opted to choose a pre-made hero or create your own from scratch using the wonderful character creation tool. If neither of those options suits your mood, you can always edit a preexisting character and animate them from walking animations to celebratory movements. The creator is simple enough to use, so anyone can start churning out character after character as the game allows you to choose a new hero to play as once you boot up the game. 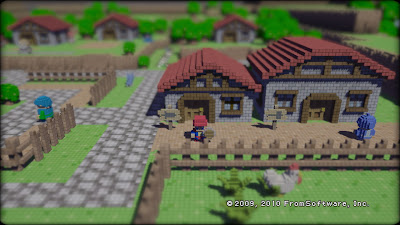 Progression in 3D Dot Game Heroes is relatively simple. You traverse a sprawling world map, picking up clues from NPCs on where to venture off to next. As you acquire new items, you can access previously unreachable areas of the world map to explore even further in the kingdom of Dotnia. The main focus are the six temples where the six sages keep their six orbs. Inside these dungeons are your standard Zelda fare. There’s rooms where the goal is to eliminate all of the enemies in the room, block-pushing puzzles, switch-throwing puzzles, and the occasional use of a special item to be found. Each dungeon has keys to unlock new rooms and further move along your progression in said dungeon, a special treasure that endows new abilities or a new item, and a boss key which opens up the door to the big bad boss’ chambers where the battle for one of the six mystical orbs takes place. 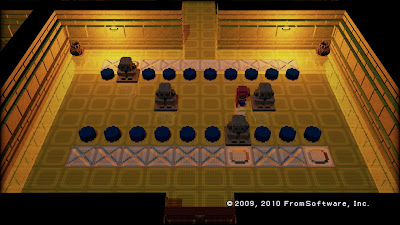 Boss encounters are the highlight of the game as fighting wave after wave of normal enemies can get a tad tedious. Unlike more recent Zelda games, all that is needed to slay each boss is your normal sword instead of the item found within the monster’s dungeon. You’ll match sword and shield with giant worms, a laser-spewing rock golem, dragons, a tentacle-slamming octopus, and many, many more. The trick here is to study the patterns of each boss as there are several trophies available for beating each boss completely unscathed.

A hero is nothing without their arsenal of cool weaponry. As you progress through each game’s themed dungeons, you’ll unlock new skills and items to wield. They can be as simple as bombs to destroy cracked walls to unveil hidden caverns and passageways or more complex such as the hookshot-like item used to cross chasms by attaching itself to a post and pulling the player across. Once again, these items are very akin to the Legend of Zelda. There’s even enemy-stunning boomerangs, bows and arrows, and magical shields thrown into the mix for good measure. If you’re going to take the weaponry of a game, why not take it from the best in its genre?

Thankfully, there’s also an abundance of helpful sub-items and swords to obtain. Each sword has its own set of stats and can be upgraded a finite number of times at the local blacksmith. Finding all of the swords in the game is no easy task as not only do you have to participate in long-winded trading sequences, but there’s also several mini-games to play for your prizes. For instance, one has you dashing through an obstacle course to achieve the best time while enough is your typical tower-defense game. The variety here is more than welcomed as questing through dungeon after dungeon slaying foes can make a hero grow weary in a hurry! There’s also life up and magic up trinkets scattered all around the world of Dotnia for players to discover. As yet another nod to the Zelda franchise, gathering four of these will up your hero’s maximum health. You can opt to collect empty bottles and fill them with helpful potions to recover health as well. The Zelda influences don’t even end there. All the way up to the hidden fairy fountains which restore your health to maximum and the cave that if you bomb the resident inside demands you to pay him to fix the door, there’s a multitude of similarities between 3D Dot Game Heroes and the Legend of Zelda. 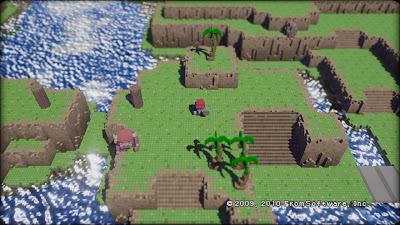 Playing 3D Dot Game Heroes is like an acid flashback to a simpler time in gaming, only this time we have many more buttons to work with! Players can cycle through their inventory with the shoulder buttons, guard attacks with a flick of a shield, and slash enemies into oblivion. With full health, your sword is strong and versatile taking up a huge portion of the screen. When your hero is damaged, the sword’s swipe becomes increasingly weaker, almost flaccid when you approach death’s door. By gathering red apples, the health-restorers of Dotnia, your sword’s attack becomes stronger. 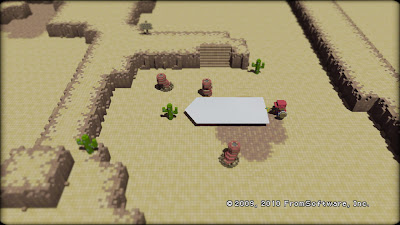 3D Dot Game Heroes uses a stellar art style where everything from the houses to the townspeople to the monsters are made up of blocks. When a monster is vanquished, they explode in dozens of dots. The game offers several different camera views for playing such as at a 45 degree angle to your hero to an isometric view to a purely over-the-head perspective. There’s something for everyone here when it comes to camera control. Things up close appear bright, colorful, and crisp whereas things in the background end up all blurry. There’s seldom any stutter in the framerate, and load times are kept to a minimum. (You can opt to install the game on your PS3 for faster load times.) The soundtrack on one hand is very simplistic and old-school. To me, most of it just comes off as grating to my ears. I appreciate the ode to 8-bit music, but a little goes a long way for me personally.

Overall, 3D Dot Game Heroes makes no attempt to hide its copying of the original Legend of Zelda. Would I call it a rip-off? Not by any means. Homage is the better word for it. Most players will plow through this game within 10-15 hours. Then there’s all the optional side content, hard-as-nails trophies to unlock, and miss-able events to watch. Players can spend literally dozens of hours in the character creator alone much more the actual game. Those yearning for an old-school Zelda game in Atlus clothing will absolutely fall in love with this title. Everyone else may be put off by the now archaic game design to give this game a second glance. Those that stick with it, however, will find a game that is definitely worth owning and Dotnia a kingdom worth saving.