Miniature golf is the perfect pastime for friends to hang out, play a round, laugh at their horrible skills, and enjoy themselves. It’s also the perfect date, too. You get to teach the girl how to swing with your hips hovering right behind hers. Perhaps I watch too many movies. Regardless and case in point, mini golf is a fun hobby that is popular with kids, adults, and everyone in between. Zen Studios best known for their Zen Pinball title on PSN have returned for an encore. This time around they’re hitting up the miniature links with Planet Minigolf, also for the PlayStation Network. Does this putt-putt simulator shine, or does it get penalized a few strokes?

There are four themes in Planet Minigolf. There’s a swashbuckling paradise with sandy shores, pirate ships, and ocean ambiance, a futuristic downtown Soho city with halfpipes, quarter pipes and everything else to make your ball feel like Tony Hawk, an ancient Mayan temple, and finally, an ice cold polar region because when I think of putt-putt I think of polar bears and frostbite. Each theme has four different courses of nine holes to play on: warm-up, pro, extreme, and wacky. You start at the warm-up level on each course, and by coming in first place on a given course, you unlock the next difficulty with new and far more challenging holes. What is simple mini golf on the warm-up difficulty is mere child’s play compared to the off-the-wall and highly hard wacky holes. 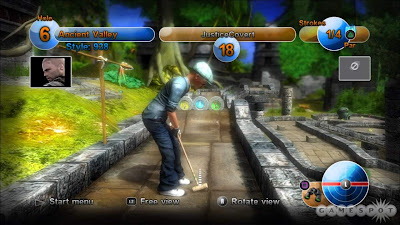 As you complete each competition, you’re rewarded with keys. These keys unlock new attire for your band of five generic-looking golfers to wear. There’s three types of keys: gold, silver, and bronze. The cooler attire from hats and shirts to pants and shoes are harder to acquire, needing gold keys won by playing and winning the extreme and wacky golf outings. That said, it is fun to dress-up your golfers with your own personal touch even if the more enviable goods are locked away with golden locks.

One of the problems with Planet Minigolf is that the golf courses quickly range from simple to tough in an instant. These are unlike any miniature golf courses I’ve seen with long drops, multiple points of becoming out-of-bounds, and even power-ups. When your ball picks up one of these said power-ups, you can activate them with the X button at any time. There’s all sorts of power-ups from using the Sixaxis’ controls to jostle and steer your way closer to the hole to your ball becoming a magnet to the pin for an easy hole-out to making your golf ball massive in size perfect for getting across otherwise uncrossable rope bridges. The power-ups do a good job of keeping things fresh and interesting if not a bit chaotic on later courses. 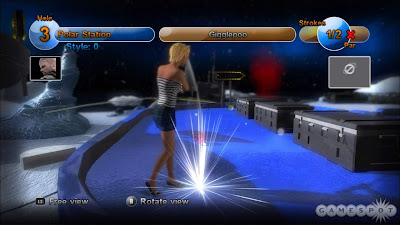 If the courses in Planet Minigolf don’t do you any favors, you can create your own built upon one of the four themed areas of the game each with their own construction pieces. You place parts down from one of five categories: straightaways, curves, plains, endings, and phantom pieces. You then snap together your hole using these various parts, place the pin and tee locations, test your hole, and then you’re good to go. You can even set hazards and obstacles like barrels and crabs if your heart so desires. You can create dozens of holes, group them as a course, and publish them online for other players to enjoy or in my case get infuriated with. You can play other players’ courses and holes, rate them, and save them to your personal collection. It’s a very cool editor which may get more play time from some people than the actual game itself!

Speaking of the game itself, there are three types of swing methods in Planet Minigolf. The first is the simplest. You just aim and hold down the X button. As the button is held, your golfer swings his or her club back. Release to smack that ball toward the hole. The second is your traditional three-click system seen in many golf games from Tiger Woods to Hot Shots Golf. You press the button once to start the gauge, press it again to set the shot power, then as the gauge swings back, you hit the X button one last time to set the accuracy of the shot. Simple as can be. Finally, there’s a less than usual swing mechanic that utilizes the left stick to swing. You pull the stick back and then move it forward to shoot. How far your hold back determines the strength of your shot. This is my least favorite of the three swing styles by far. It’s far too inconsistent for my tastes. 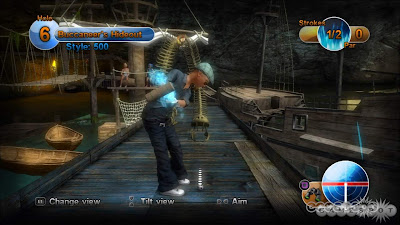 What is also inconsistent is the game’s camera. Many times you’ll be unable to move the camera around to actually see the blasted hole. Yes, there’s an aerial view that shows the entire hole, but trying to see the hole is like trying to find a needle in a haystack. Forgive my cliched analogy.

Planet Minigolf is presented pretty well though I can say that a little bloom goes a long way. You might have to wear sunglasses the bloom lighting can be so bad. Though you do have good animations in your golfers from their happy taunts to their aggressive “I can’t believe I screwed up this shot” poses. What accompanies the visuals of Planet Minigolf is a series of themed songs perfect for the courses you’re playing on. Techno for the futuristic Soho, a seaside shanty for the pirate-themed courses, etc. Just turn down the buttrock on the main menu. That can get aggravating in a jiffy.

Planet Minigolf may not be the best mini golf simulator ever, but what it does succeed in is a fun experience for players. While an imperfect game of putt-putt, Planet Minigolf does shine in its robust course editor, challenging (if not too challenging) holes, and fun multiplayer sessions either online or off. When the weather turns sour, and outdoor mini golf isn’t an option, Planet Minigolf is here, it’s cheap enough, and it’s a barrel of laughs with friends.