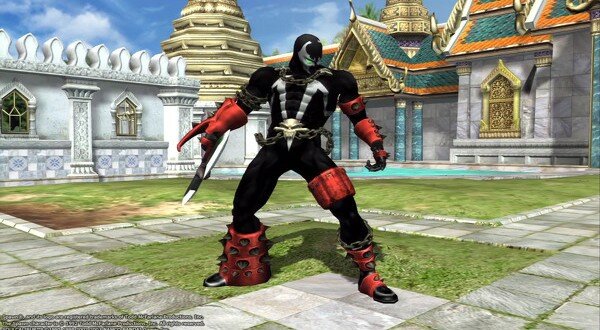 Hell hath no fury like a good-hearted Hellspawn scorned.

Spawn has been confirmed to return in Soulcalibur 2 HD Online, as announced by Namco Bandai.

The famous anti-hero was originally a guest in the Xbox version of Soulcalibur 2, while Heihachi Mishima was the Playstation 2 guest, and Link was the GameCube guest. With Soulcalibur 2 HD Online, players on both the Playstation 3 and the Xbox 360 can play with both characters, for the first time.

The game is developed by Project Soul, Soulcalibur’s development team, and it’s coming out in celebration of the game’s 10-year anniversary. It will feature online gameplay (woah!) and updated HD visuals (woah woah!), as if that much wasn’t evident from its title.