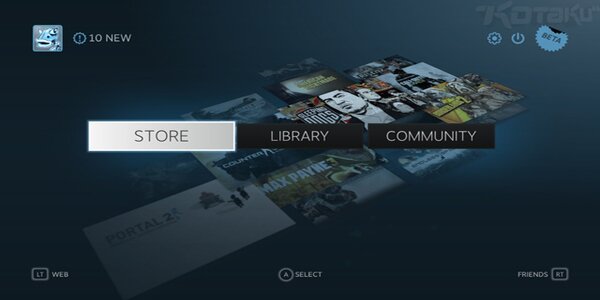 Steam “Big Picture” is coming, and it looks amazing

It’s common knowledge that Valve was working to bring Steam to our TV’s – not a console, just plugging your PC onto your TV and letting Big Picture do its thing. Today, the beta started, and as Kotaku reports, it is a wonderful new chapter in gaming.

Why would you get a console over a PC, if you intent to use it just for gaming and minor other stuff (movies, some internet browsing etc)? Because it’s cheaper, easy to connect and set up, and you can lay on your couch like a sloth with a controller in your hands and play. Valve intends to go the same route with Big Picture, albeit swapping the console with your PC.

Valve’s Greg Coomer, head of the team that made Big Picture mode, spoke to Kotaku:

“We’re confident in some things that customers want. They want a full-screen experience. They want to be in the living room. They want to use a game controller. They wanna have a social gaming experience. And we have this platform that lets us ship a significant portion of that experience.”

Big Picture won’t be perfect, but Coomer believes it will pull off most things people crave successfully. When asked about the rumored Steam Box, Coomer replied:

“What we really want is to ship [Big Picture mode] and then learn. So we want to find out what people value about that. How they make use of it. When they make use of it. Whether it’s even a good idea for the broadest set of customers or not. And then decide what to do next. So it could be that the thing that really makes sense is to build the box that you’re describing. But we really don’t have a road map. And we think we’re going to learn a tremendous amount through this first release.”

Valve is wondering, though, how will gamers receive Big Picture. Moving your PC around your house to connect it to your TV is something I wouldn’t ever do, personally, and if people are looking for a console experienced, that’s not what they would do, either. So what does Coomer say about this?

“Each individual gamer is going to have to decide in the short term whether the value that Big Picture brings is something they want to configure for themselves. And for some users it’s going to be quite easy. For some users it might not be worth it yet. But that’s one of the things we’re going to find out when we ship. And then over time, I think we’re going to figure out which of those scenarios, or what ways do customers really want us to get involved in solving the rest of the problems that, say, our software can’t solve for them. And if it’s getting involved in shipping some kind of hardware, then we will get involved in doing that if we need to.”

How would Valve battle this? A dedicated Valve-box, or an open console like Ouya? Unknown. For the record, though, the Ouya people never spoke with Valve, so Steam appearing there is, for now, not in the picture.

A great feature the Big Picture sports is its virtual keyboard, pictured below.

It is unnecessary to describe why this is an exciting new addition. Instead of being stuck with QWERTY keyboards, or the “teams of 3 for each button”, this one is pretty easier to work with. Just tilt the stick to one of the “pedals”, and hit one of the four buttons, to get the letter you want. As some of you noticed, the Big Picture mode was showcased using an Xbox 360 controller.

Since everything is there (browser, friends list and chat, search for games, purchases etc), a great virtual keyboard had to go with all those. And you can even multi-task, as Kotaku notes, “switching back and forth between a game and your browser without minimizing to the desktop at all.”

Auto-correct and context awareness are also in line for future updates, says Coomer. “When you’re in a web browser, it should know that you might want to put ‘dot com’ at the end of your address”, later saying that they want it to support split-screen mode, with individual Steam accounts for each player.

To sum up, Coomer didn’t cross out the possibility of a Valve console that acts solely as a Steam box, to save you from the cost and trouble of moving around (or buying) your PC, just to use Big Picture, but he also said perfecting Big Picture is the priority now. What can we expect? Only time will show. In the meantime, take a look at some more screenshots, below (all images are courtesy of Kotaku).