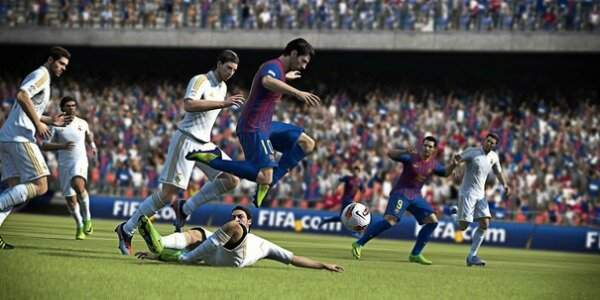 During EA’s GamesCom conference, we learned a lot of things about FIFA 13. Mostly, about how it’s improved as a game on its own, regardless of online features, but what attracted our attention was the brand new Match Day feature. I know you’re interested in Ultimate Team and the like, but take a look at this.

With Match Day, you will hear real-world developments through FIFA’s in-game commentary, but most importantly, it will affect gameplay. In-game stats will be tweaked, according to real life, on-pitch performance! EA Sports wants to achieve fidelity between the most realistic football game we currently have and the real life football, as a sport. I don’t have any details on how this will work out, we will surely find out as time passes, but this definitely sounds exciting. Imagine all the possibilities this opes up! Also, fixtures will change based on what’s happening in the real world, contributing even more to the realism-creating mechanic FIFA 13 will have implemented.

Also, we have Ultimate Team information being available both on the site and the dedicated app, and we also have a Seasons update, expanding it with a new, 2vs2 online co-op mode and persistent squad saves, among division titles for all divisions, and a neat trophy cabinet to satisfy your ego, with trophies added as you progress through the game!

As a final note, the game looked way more fluid, and how the engine’s realism affects gameplay is truly a great feat to accomplish. Every single move can change something in your game, and every collision can change the flow. We’re excited to see what else is in store until the game releases this September!

One Comment on "FIFA 13: How Match Day feature changes games, and more"