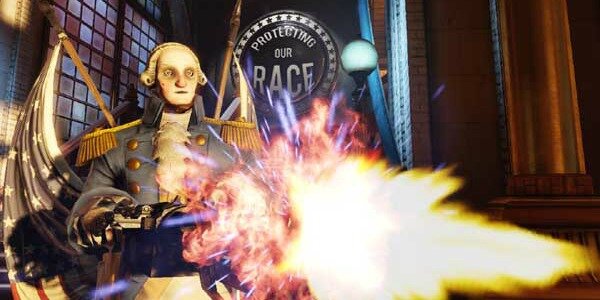 Irrational Games’ beginning the process of unveiling Bioshock Infinite’s Heavy Hitters. The first to be revealed is The Motorized Patriot. Screenshots and details inside.

Irrational Games boss Ken Levine told X-Play that Heavy Hitters have been designed to offer a greater variety of powers.

“These are enemies that are used to not just be more powerful, but to augment the abilities of the more traditional BioShock enemies,” said Levine. “You’re going to come across them in certain areas of the game, and they’re going to provide a really unique challenge.”

The Motorized Patriot is a simulation of George Washington, sporting a porcelain face, two huge flags and a nasty-looking, dangerous Gatling gun named pepper-mill. He also has a rather fearless face.

“Unlike most of the enemies, he’s completely fearless,” explains Levine. “He doesn’t have a sense of self-preservation, so he’ll just keep coming at you and coming at you.

Once he destroys the Patriot, Booker can actually go pick up the pepper-mill and use it as a heavy weapon. The only place you can get it is from a destroyed Motorized Patriot.”

Inside Irrational: from System Shock 2 to Bioshock Infinite