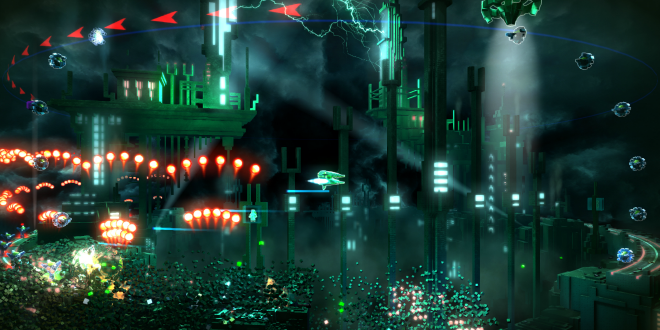 The PS4 is launching in two days (depending on where you live), and the next PlayStation Plus update is the first to include PS4 games. And boy, does it continue to go strong.

Resogun, the impressive PS4 indie launch title will be free for subscribers. Could you imagine that a 2D side-scroller would be a showcase of next-gen console power and steal the spotlight from AAA titles?

Next up for the Ps4 is Contrast, a stylish platformer that lets you switch the world from 3D to 2D and make it your playground as a young girl’s imaginary friend.

For the PS3, the games on offer are no lightweight contenders, either. GRID 2 will spin you round and round, being one of the finest modern racers and made by — who else — Codemasters. Blending realism with arcade, precise controls and tons to do, GRID 2 is a must-have.

The next game is Guacamelee!, a 2D Metroidvania platformer that lets you assume the role of a luchador with access to the “other world”. Strong combat, open-world, quirky art style and Mexican myths and folklore combine to make Guacamelee!, which is also cross-buy for PS3 and Vita.

Lastly, Vita owners will receive Sonic & All Stars Racing Transformed, a pretty addictive love letter to SEGA’s franchises through the kart-plane-boat racing genre, with characters and tracks that span series and generations.

And truly last, but certainly not least, is Grand Theft Auto: Liberty City Stories. A pretty impressive PSP title for your PSP or Vita which carries everything its console brothers do. Don’t underestimate this one; it’s GTA in your pocket.