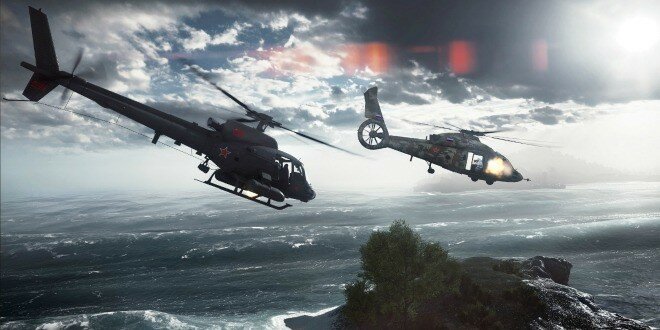 Bigger than it looks.

So here we are, a day after Battlefield 4 beta has been made open for Medal of Honor: Warfighter owners, pre-orders and Premium owners 3 days before everyone else. I’ve played a ton of it, and since I know it’s a much anticipated game for a lot of our Games Thirst people and that not everyone got in early, I’ll give you some of my impressions and experiences with the game so far.

More dynamic than ever

Imagine this: playing Conquest, an objective is based at the top of a skyscraper. Strategic helicopter fights are a must, and you have to defend the position with everything you’ve got, since elevators are the only other way up there. Unless you got some big guns. And bring the skyscraper down. And the objective is now placed among the debris, while a huge wave of dust has covered everything and your vision is now not as clear. Done picturing it? Now, go make it a reality in Battlefield 4.

Seriously, if people were disappointed with DICE’s Battlefield 3 beta map choice (Operation Metro), then they’ll be pissing their pants in joy this time around. This feature alone promises so much for the future. You can now shape the battlefield to your own needs, and tactics can change on the fly; if the skyscraper goes down, for example, your “air superiority” squad must now change. The helicopter should drop marksmen off at the top of a nearby building and let them snipe people from afar, while ground troops take the flag. In how many maps, and in which ways, will this be available? I’m intrigued to find out.

More fluid than ever

After capturing objective B at the aforementioned skyscraper, my work there is done. My teammates are setting up their defences, and me and a squadmate have to move on to objective C, which is based inside a mall on the ground. We look at each other, organize through our mics, and jump off the building. After some air time, we open our parachutes, and land on the top of the mall’s glass roof. We quickly hide, exchange ammo and health packs (which are now not area-of-effect, but single-use pick-ups), and sit atop the glass roof, capturing the objective. An enemy notices us, shoots the glass, and we’re now dropped into the mall and disorganized. I quickly shoot for suppression, sprint and vault over objects while reloading, when suddenly another enemy appears in front of me. Luckily, he has his back turned to me out of confusion, and I don’t miss the chance to stab him, and then my reload continues from where it left off — perfect.

Meanwhile, my squadmate has wiped the floor with the previous enemy, and we’re now kings of of two objectives. He says over the mic that turning on and off your laser sight in the enemy’s face is disorienting them, and it’s just at the press of a button (PS3 version, PC’s had this). This, my friends, is nothing more than a typical Battlefield 4 scenario. You can do crazy stuff like this and much more, you just need to think of it, have an ideal chance to perform it, and off you go. There’s also stuff like diving when in water, or using your pistol when swimming; the new tactics you can come up with are endless. Imagine a full-on assault from underwater, just how great would that be?

More small details than ever

So, my team only has to get objective A now, which is located in the metro and is accessible from a station at the west. It’s underground, so the enemies might as well bunker in there and not allow anything in; simple enough. That’s when we have to come up with something to make them lose their calm. So we think, could this fancy concrete art-thing over the metro’s glass roof be destroyed? It’s worth a try.

And off we are to board a M1 Abrams, and I serve as the gunner (just like I did back in the army days!). We cross the bridge that connects the map’s two parts, and there’s retractable/detractable short bollards to prevent vehicles from coming over. I get out, lower them for our tank, then raise them back up to at least steal some time if the enemy brings vehicles over (the amount of people I saw not knowing what to do was astonishing — granted, I didn’t know at first, but curiosity got the best of me and I explored around and found that a switch does the trick). Now we had the big guns at the ready, so we fired our missiles, while some ground troops fired their RPG’s. The result was the big beautiful thing over the metro going under, into the metro, and raising dust and all hell with it. We swiftly jumped in through the now-open roof, stormed the enemies, and claimed objective A.

Elevators and street bollards were usable in this map, and it makes me think, what other objects are usable in other maps? It’s a complete game-changer if you use it right; for example, setting an awesome, air-only team to fight the enemy’s helicopter seals of air entrance to objective B, and having a team cover the elevators is a death sentence for the enemies that try the only way up.

As previously mentioned, health and ammo packs are single-use pick-ups. That changes a lot; camping is not as fluid and viable anymore. Another small in context, big in action change is that every starting gun (at least) comes with an optic. Mind you, it might be a weak one; but still comes with one. Iron sights are not my thing in Battlefield (AEK-971 was the only gun I could aim with its iron sights), and this certainly is a welcome change. The support’s gun (my class of choice) also sports a dual-scope, changed at the press of a button. Subtlety is evidently a prominent feature in Battlefield 4, and one pulled off greatly.

In other news, there’s country dog tags, there’s a truckload of dog tags in general, the menus are easier to navigate and respond faster, and inviting friends over/seeing how a friend does is easy and non-detracting from the experience. For example, a friend of mine was playing yesterday, and I already was in a match. When he got in a match, a small pop-up opened at the top right corner to notify me, and I didn’t even mind it.

Graphically, there were some pop-ins, mainly in textures, but it’s a beta. If they transfer over to the retail game, I’ll surely complain then, but for now, I won’t.  The dust cloud is also a great addition, one you won’t understand unless you experience. The power of the cloud (huehuehue)! Improved and more colorful than Battlefield 3, and may I say, cleaner. The screen isn’t cluttered, even when a lot is going on at once (at least on this map, Siege of Shanghai), or when massive destruction takes place (which is more detailed, by the way). Matchmaking is almost instant, server browser is there from the get-go for consoles. There’s so much work put in there… it shows from the moment you pick up the controller/mouse-keyboard.

And this is, my friends, my day one experience of the Battlefield 4 beta. I’m looking forward to more of you coming in, as it’s absolutely something that mustn’t be missed. We’ll post more stuff as the days go by, and we’re preparing for a huge Games Thirst Battlefield 4 beta meet-up! So, until I see you by my side, I’ll go kill some people and blow buildings up