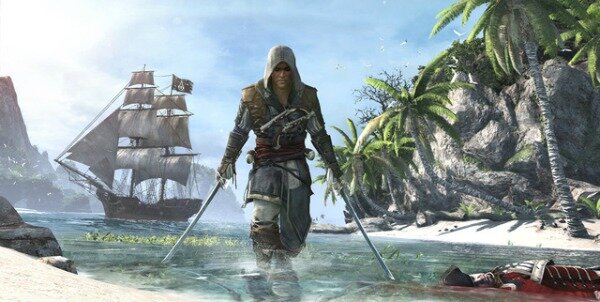 Today’s when Ubisoft planned to reveal Assassin’s Creed IV in earnest, but leaks messed that all up. It’s okay, though, because there are tons of details still to be known, and in the game’s previews hitting the internet today, there’s plenty to be had, including a new character, locations and whales – and that’s just for starters. I’ve included some points key below, including two trailers.

Think pirates in the 18th Century.

You can attack other pirates. You can harpoon whales from your ship. You can dive and explore underwater. You can assassinate bad guys in cities.

Assassin’s Creed IV is written  by the scriptwriter of Revelations, Darby McDevitt. Its art director is Raphael Lacoste, who also held the same job when Revelations was being developed, a game credited as having the most beautiful Assassin’s Creed world.

The developers mention fishing villages, plantations, hidden coves with smugglers in them, naval forts and dense, claustrophobic jungles that might sometimes contain ruins.

There’s no campaign co-op, and a new style of the “brotherhood of assassin’s”, a la Assassin’s Creed: Brotherhood, is part of the game.

Modern times: It’s back, set in 2013. No Desmond Miles, descendant of the main games’ protagonists. He’s done for. Trottier: “The present day in ACIV is basically the logical continuation of the ACIII present day. But this time, instead of making you play through a character of the past through a character in the present, we wanted to make it even more immersive for the player, make it more fun. So, you are now a full-time employee of Abstergo Entertainment, and you’ve been hired there as a researcher. You are the one in the Animus doing the research on an important character from the past, Edward Kenway.”

Desmond Miles was the Assassin-in-training who died (or something) at the end of ACIII but had been using a device called the Animus to relive the lives of his ancestors, his relivings constituting most of the gameplay in the older games. Abstergo is the front company for the Assassins’ rivals, the Templars. For some reason, their Entertainment division sometimes makes games, including, according to the fiction, last year’s PlayStation Vita game, Assassin’s Creed: Liberation.

Eight of Ubisoft’s studios are working on the game, Ubisoft creative director Jean Guesdon has confirmed:

We are extremely efficient with this kind of process now. Multiple studios have been involved in parallel on AC games starting since AC2.

We’ve put in place a dedicated team to ensure the best possible communication with tools and processes to make sure that everybody knows what he has to deliver.

The PS4 and presumably Xbox 720 versions of Assassin’s Creed IV will see many improvements over the older siblings, PS3 and Xbox 360.

In addition to improved graphics and physic, Next Gen versions will bring to the players new connected features allowing them to feel that even if they remain ‘Single Player’ it will be better to be a ‘Single Connected Player’,” explained Guesdon.

“I mean, that Next Gen Consoles will allow players to have a solo experience that benefit the presence of a huge community.”