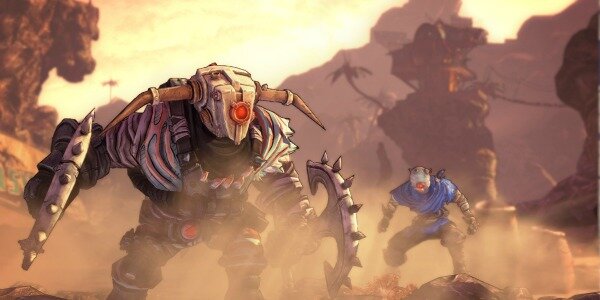 You want to be a boss at Borderlands 2, but darn it, “how do I create the best skill tree and character builds?” you ask yourself.

No more worries, my friend, below the break you’ll find what you’ve been looking for.

Axton can fulfil many different roles, from a heavy assault rifle damage dealer to a bullet-sponge. Our builds pick one of either, as well as ways to bolster the Commando’s Sabre Turret ability.

Skill tree combinations if you want to…
…deal the most damage

This build focuses on the damage capabilities of Axton and his arsenal. His Sabre Turret ability is largely left untouched in favour of his own personal damage output, except with an increase of 30 per cent damage while the turret is active.

Our build opts for an increase of 30 per cent and 15 per cent in health and shields respectively, while reload speed is increased by 40 per cent. These can be replaced with increases to magazine size and Longbow and Nuke abilities for the Sabre Turret.

…make the most out of the Sabre Turret

This is the most customisable of Axton’s possible builds since there are so many possible permutations. We’ll include the most useful, which excludes the Nuke ability – since this is incongruous with the Gunpowder skill tree and doesn’t really compliment much else.

Dual Turrets: Two turrets are obviously better than one, and this is our preferred method of using the Sabre Turret. The addition of a few Guerrilla skills means you can unlock rockets for them both, too.

Jack Of All Trades: This build actives each of the lower tier Sabre Turret abilities, meaning you’ll get a shield, rocket pods and increase the range at which you can deploy the turret. It does mean you don’t get the later tier abilities, but it increases Axton’s personal damage output too.

On Defence: Using this build will boost your ability to use the Sabre Turret for defence. It’ll add a shield, increase your grenade capacity – to throw from behind the shield – and bolster your shield and health slightly.

…have the most health and shield points

Like most ‘warrior’ classes, the Commando can specialise in two distinct ways: either a heavy damage dealer or, as this build suggests, as a powerful Tank class intended to absorb a lot of damage.

This build increases health, shield, the speed and efficiency of regeneration and adds a couple of abilities to increase your survivability – such as ‘Grit’, which has a chance to ignore damage that would otherwise kill you.

As cool as Zero is, he’s still fairly limited in his set up. Built largely for sniping or melee combat, it’s hard to find a balance between the two. You’ll need to pick an angle and stick with it.

Skill tree combinations if you want to…
…focus on sniping

There’s a whole skill tree devoted to Sniping so this one should be fairly easy to understand. As such it’s one of few builds that benefits from the entire skill tree, which increases damage dealt, critical hit chances and adds the Bore ability, which makes bullets penetrate enemies.

The remaining three skill points we put into Iron Hand for increased health, but you could put these into reload and weapon swap speed or improved melee damage.

There are a couple of options for melee damage, one that boosts damage and makes the Assassin a dangerous melee adversary or a second one that adds a few abilities to the melee function.

This build enables you to use Deception to increase melee damage, and even re-stealth and reactivate the ability if you successfully kill someone while invisible.

Our second build, however, is more of a mix than the last, increasing melee damage but missing off the last Bloodshed skills to unlock Death Mark, which marks an enemy after a melee attack and increases damage from all sources for 8 seconds.

…focus on the Deception ability

Deception enables the Assassin to vanish, but can also be tweaked to be even more useful. This build increases damage a bit, but is mostly useful for its explosive holographic decoys and the thrown kunai abilities.

Elsewhere we’ve chosen to increase maximum health and critical damage, but the remaining 10 or so skill points can be flexibly applied anywhere.

He might not look like it, but Salvador is actually the most customisable of characters, and can emphasis rate of fire, overall damage, an emphasis on Gunzerking or a focus on defence and health boosts.

To make the most of your damage dealing capabilities you’re going to want to swap weapons a lot. Bear this in mind when building your character and collecting weapons.

This build focuses on that function to deal the most damage, which is most beneficial if you use pistols. The remaining skill points can go into additional health, though we’ve gone with the ammunition bonuses from Inconceivable and Filled To The Brim.

…take a lot of damage

The beauty of this build is that the minimum you’ll need to spend on it is 25 skill points, or 26 if you fancy ‘Come At Me Bro’ (you should, it’s a life-saved).

You could spend the additional points – as we have – by increasing damage and fire rate when health and shields are low, with the rest fitting nicely into more efficient ammo consumption.

Or, alternatively, you can spend the remaining 20 points in increasing damage or looking to unlock abilities like Auto-Load or Double Your Fun.

This is similar to the build that focuses on damage dealing, except that it forgoes some Gunlust skills in favour of a few more Rampage ones. This is because relying on pistols means you’ll need to increase reload time, rate of fire and improve ammo consumption.

There isn’t really any room to alter this build to your liking, though you can alter it if you don’t care too much for the Gunzerking ability. If this is the case, swap out Keep It Piping Hot and Yippee Ki Yay for whichever alternatives you prefer.

…make the most of Gunzerking ability

The aim of this build is to unlock ‘Keep Firing…’ in Rampage. You can be as direct or filled as you like, though you can save a few skill points if you just go for the Gunzerking-based skills.

The remaining points can be spent either on bonus damage while Gunzerking (though this does require matching dual weapons) or our preferred option, which boosts health regeneration and overall gun damage.

Maya is a weaker character and largely plays a support role within the game. As such, her character builds tend to require you to pick an aspect of her play style and stick to it.

The majority of skill points will go into Cataclysm here, with 5 in Motion and a few in Harmony. If you want the last Cataclysm ability Ruin you can either replace it with Acid Cloud (not recommended) or take a point off Recompense.

As such, there isn’t really much room for alteration here. That said, if you prefer you can swap out some Harmony skills for Kinetic Reflection and Converge abilities in Motion.

Healing is probably the best role for Maya, so most of your skill points here will go into Harmony. This build will unlock life orbs and regenerative health when Phaselocking enemies, as well as the ability to heal allies by shooting at them.

You can also selfishly add Sustenance and Life Tap to this to improve your own personal health regeneration.

The remaining skill points can go into unlocking either Converge in Motion or Cloud Kill (and bonuses to status effects) from Cataclysm. Of course you can also remove Sustenance and Life Tap to free up 10 more points to spend on alternative Phaselock improvements, such as Quicken and Sub-Sequence.

See this build, or the alternative Sub-Sequence version.

The idea with this build is to unlock as many Phaselock enhancements as possible, and though we’ve focused on getting the mind-controlling Thoughtlock you might want to knock a few extra off the later tiers of Motion for alternative options in Harmony or Cataclysm.

We’ve split the remaining skill points into Harmony and Cataclysm to increase damage while using Phaselock, as well as imbue it with explosive damage. Again, if you prefer you could tweak these skill points to unlock ricochet or healing bonuses when using Phaselock.