The Legend of Zelda series has been around for over two decades. There’s been many high-highs, and some lows thrown into balance things out. When it was revealed that for their next game, The Legend of Zelda: Spirit Tracks, that Link would be commanding a train, the whole fanbase was once again split, as most massive fanbases tend to do. Now that I’ve gotten a chance to sit down, don my engineer’s cap, and hunker down with the newest Zelda, is this a spirited new take on the Legend of Zelda franchise?

We meet our young, dashing hero, Link, a boy from a humble seaside town, as a lowly engineer on his way to get his official engineer’s license. Link meets with Princess Zelda who with Link’s help, sneaks out of the castle. Not a wise idea when you have a crazed chancellor seeking to usurp you and your power for his own gain. Enter Cole. He’s the primary villain of the story. With help from his right-hand man, Byrne, Zelda’s body and spirit become separated, and the tower of spirits splits apart into several pieces. Now Link and a select few are the only ones who can see or communicate with Zelda, the spirit tracks, the roads of Hyrule, are vastly disappearing, and monsters are taking over the land. It’s up to Link, and for the first time, Zelda, to right the wrongs of Cole and stop him from resurrecting an ancient evil bent on destroying the land. Certainly more interesting than just being a boy who’s an engineer, now he can be a hero who’s an engineer! 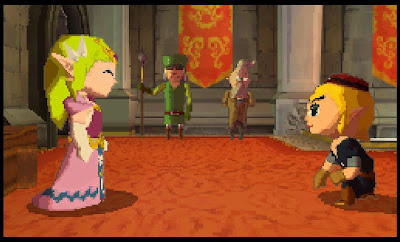 The structure of Spirit Tracks is somewhat different than past Zelda games. First you enter the tower of spirits. This dungeon is much less strenuous than Phantom Hourglass as you need not retread through the same floors each time you visit the tower. After running through several floors, you’ll pick up a rail map. This opens up new spirit tracks to rock and roar on that will lead you to the next realm or area you have to go. There’s four realms in all: forest, snow, ocean, and fire. Each takes up one corner of Hyrule’s map. Anyway, after meeting up with one of the elders of the realm which is an arduous process all on its own, you’ll unlock new tracks to reach that realm’s temple. Complete the temple, and part of the tower of spirits will be restored, allowing you to invest your time and energy into the process anew. It’s a cool formula, and it definitely works. Though the traditional dungeon formula is used, it feels much fresher in this game. 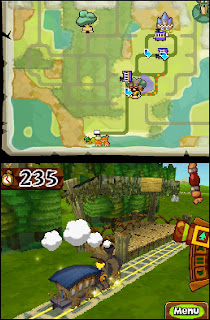 The four realms of Hyrule house different races and towns to explore. The forest realm is home to various Hyruleans, the snow realm houses the kooky Ayouki people, and the fire realm makes its lava shores and mountainous ridges home to the rock-chomping Goron clan. Apart from towns and villages, when enough spirit tracks are restored, you’ll start coming across secret areas completely optional to the player. These usually house some excellent unlockables such as a hidden boss battle! There’s plenty of side content to take in and explore such as collecting health-increasing heart containers, arrow and bomb-boosting quivers and bomb bags, treasure which can be sold or traded for new train parts, force gems (first seen in Four Swords) to open up new tracks, and many more. 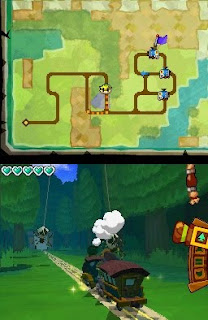 Link’s main mode of transportation this time around is a locomotive train. The paths you can take are far more limiting than the open sea of

Phantom Hourglass as you have to follow tracks. As you complete several sidequests and optional content, you can unlock new tracks to plot your routes on. Controlling the train is easy-peasy. You simply chart the course which can be changed at any time while in motion. While in motion with Link’s locomotion, you have a whole assembly of tasks assigned to you. You have a cannon to thwart off attacking monsters which is as easy as a tap on the screen of where you want your shot to go. You have a whistle perfect for shooing away sleeping animals sitting along the tracks and to scare away certain monsters so you need not encounter them in battle. When you reach a junction, you have the choice of staying the course or pulling the switch to change direction, from left to right or from right to left. Pulling into a station is enjoyable enough to do. I personally love charging in fast, and then screeching into a quick halt. The only real problem with the train is that it can be tedious going over long distances, but thanks to various warp gates this problem is somewhat remedied.

Later in the game you’ll be able to transport passengers and freight from town to town for various rewards. When transporting a passenger, there’s signs to watch out for and follow such as speed up or slow down. Violating these rules decreases that passenger’s happiness. If it goes under a certain level, you fail. With moving freight from coast to coast, city to city, and realm to realm, it’s important not to let monsters shake up your train or you’ll lose some cargo. Some freight is time-sensitive and needs to be transported within a given amount of time. These missions are mostly optional, but the rewards are great as you can earn force gems to unlock new paths for your train to take. 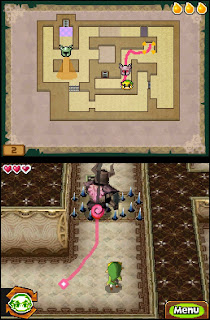 As for temples, there are five main ones in the game plus various trips back to the tower of spirits which is a dungeon all onto itself. The tower of spirits plays similarly to Phantom Hourglass’ Temple of the Ocean King, but as previously stated there’s no backtracking to speak of. It’s purely optional to go back, use items to open up previously inaccessible areas, and grab some new treasure for a certain character in the game. Each time you return to the tower of spirits, a new section of the tower has been restored, conveniently putting your newest item acquired to the test. Phantoms return, too. These big armored oafs are impervious to Link’s ordinary sword, but by collect three light shards located in the dungeon, you’ll be able to attack them from the back, freezing them, and allowing Zelda to inhabit their body. Creepy! The tower of spirits is the only place in the game where teamwork between Link and Zelda is used unfortunately as the puzzles and obstacles are so cleverly designed with both of them in mind. Zelda for instance hates rats, even in her spirit form. By defeating all the rats and blocking up the hole where they come from, Zelda can get through the area unscathed psychologically.

The five temples each have their own theme: forest, snow, ocean, fire, and sand. Each one has obstacles, enemies, and puzzles pertaining to said theme. The goal of every temple is simple. Find keys to open locked doors, solve puzzles to open sealed doors, acquire the temple’s special item (more on those in a bit), retrieve the big key to open the boss’ door, take down the boss, and restore a piece of the tower of spirits. Simple enough, right? Generally, the rule of Zelda games is that the item you find in the dungeon is the one you use on that temple’s boss. There is no exception to that rule in Spirit Tracks. 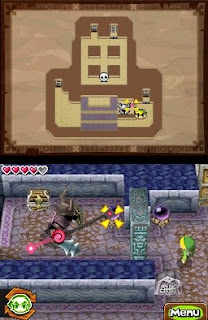 Items are an important part of the Zelda universe, and again, there’s no exception to that rule either in Spirit Tracks. Link has an impressive arsenal of weaponry from faithful standbys like bombs and bows, but there’s also new twists on old favorites such as the boomerang. Impossible on any other platform, you can draw a path for the boomerang to follow. This is a must for several switch puzzles. You can also carry fire and ice across torches to light them up. There’s also new items, too, such as the sand staff and the awesome whip which lets Link cross chasms without trouble, slap away enemy shields, and much more. Finally, one of most important items of the game is the spirit flute. As you venture across Hyrule, you’ll come across numerous stones that give off a faint melody. By playing the melody on your flute, you can learn new songs that help you out such as a heart-refilling song, a song of discovering buried items, and more. Playing the spirit flute is easy, though it will make you look like a fool in public. Forget them though– you’re saving the land of Hyrule! You slide the stylus on each pipe and blow. Though you will need rhythm to pass some of the elder’s tests, so keep that in mind.

Long ago, I had stated that Kirby: Canvas Curse made the best use of the DS’ features. That game has been usurped by Spirit Tracks. You control Link by pointing the stylus on the screen and moving it about to move Link. Tap enemies to take them out, double tap the screen to perform a roll, and so forth. Playing with Zelda isn’t as complicated as I had once thought it would be. There’s a little round button underneath whoever Zelda is possessing. By tapping that, you can draw a path for Zelda to follow. Sometimes she’ll get caught on a wall, and your drawing will be for naught. A clear majority of the time, however, it indeed does work. You can also call her to attack enemies or simply follow Link around. Overall, the controls feel intuitive and fresh. Sure, there were times where I wanted to use the d-pad, but these moments were vastly outweighed by the positives of the touch screen controls. 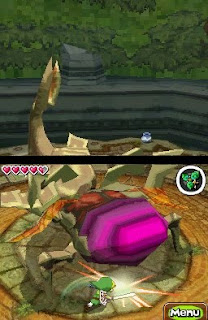 As a looker, Spirit Tracks definitely pushes the DS’ hardware for sure. There’s an impressive amount of polygons being churned out, and there’s no sign of slowdown whatsoever. This is definitely one of the better looking 3-D games on the platform. The soundtrack of Phantom Hourglass, I felt, was uninspired. It just didn’t have that many memorable themes. Perhaps the developers thought the same because the composers this time around have outdone themselves. There’s so many toe-tapping, epic-sounding songs and themes to listen to in Spirit Tracks. The overworld and boss themes are just a sample of my favorites. This is definite soundtrack of the year material, boys and girls.

As a total package, Spirit Tracks greatly outperforms its predecessor in both gameplay and presentation. There’s so much more to do and see, so many more bosses to beat down, and so many sidequests to take part in. Spirit Tracks can take anywhere from 15-25 hours to complete, and you’ll mostly have fun all of those hours you play. An obvious (from my point of view) recommendation for all DS owners. The Legend of Zelda: Spirit Tracks is the must-have game of the season for handheld gamers.

At Infinity Ward, Morale Is Low
Halo: Reach: Is The “Most Powerful” Says Bungie, The Studio’s “Best Halo Game”