The Ratchet & Clank series has yet to reach its decade anniversary, and already the franchise has had six main installments with roughly the same formula. The one that did change things up, Ratchet: Deadlocked, didn’t receive as much in the way of commercial success. With the second edition of the franchise on Sony’s hi-tech Playstation 3, is this old lombax ready to be put down or has he finally learned some new tricks?

A Crack in Time follows directly to the conclusion of Tools of Destruction and The Quest for Booty. Clank has been transported to the evil Dr. Nefarious’ lair by the mystical entities known as the Zoni, and it’s up to Ratchet and bumbling superhero, Captain Copernicus Qwark, to go on a mission to save Clank as well as the galaxy from Nefarious’ sinister plans– whatever they might be. Meanwhile, Clank escapes from Dr. Nefarious’ control, and this is where the action begins. You take Clank through a series of halls and platforms as Nefarious’ henchmen pursue, blowing everything up in their chase of the wily little robot, Clank.

The majority of the game splits off between players taking control of Ratchet and playing as Clank by his lonesome. Clank gets about four levels to himself throughout the duration of the game, and for the better half of the game, the two stay separated. Clank gains new abilities this time around. No longer can he just float and hover in the air for a short time. The resourceful machine can now use the power of time. He can toss time bombs that slow down fast-moving platforms, giving Clank enough seconds to move across them. He’ll also earn a temporal staff that will allow Clank to reflect enemy attacks back at baddies as well as fix broken down machines. To save the temporal state of the universe, you will participate in mini-games where the goal is to travel around a planet with your laser, shooting away anomalies until they return to normal. This is all the while watching out for time rifts which will turn those fixed anomalies back into something dangerous. 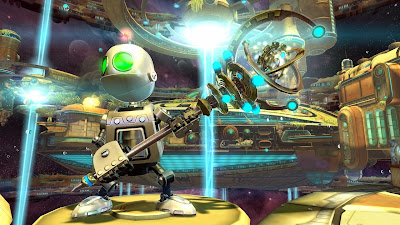 Then there’s the special time puzzles sprinkled throughout Clank’s levels. These are rather clever as they have Clank recording himself performing an action such as stepping on a button to open a door. Meanwhile, you can record and playback the recorded Clank opening the door for the player. It’s very ingenious how later puzzles work, and yes, they can be very maddening later on. It’ll take a sharp wit to conquer these puzzles as they are some of the most difficult the series has ever known. Regardless, they’re also rewarding when completed– no matter if they slow down the pace of the game to a crawl.

Ratchet on the other hand is without Clank until late in the game. This means you start out with just a double jump and no hover abilities this time around. Not only is the near and dear to our hearts swingshot back and ready for more swinging and action, but there’s several new gadgets available to Ratchet. The hoverboots allow Ratchet to race along platforms much faster than normal walking. He can rocket off ramps with ease as well as hover– an ability he would otherwise need Clank for. The other new gadget is the omnisoaker. This tool sucks up liquids which can be used to water plants that will turn into catapults for Ratchet to leap off from, to take oil and put it on rusty switches to make them usable once again, and to grab nectar from certain plants as a treat for Ratchet-eating infestations of bugs. What’s cool about the gadgets in A Crack in Time is that they’re designated to the d-pad instead of inside the traditional weapon wheel. It makes things so much more intuitive and stream-lined. 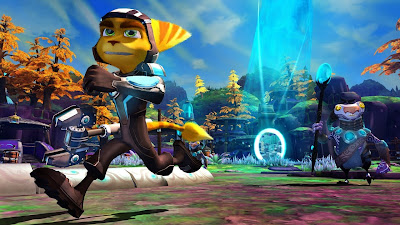 Apart from cool and wacky gadgets, kick-ass weaponry has always been a major focus of the Ratchet & Clank series, and this go around, A Crack in Time does not disappoint. Just like in past games, by defeating enemies with a given weapon, that weapon gains experience. Gain enough experience for a weapon, and it grows stronger, giving the player more ammo to work with or firepower to blow baddies back where they came from. There’s typical pistols, shotguns, and bombs, but the more entertaining weapons are those completely unrealistic. For instance, the Sonic Eruptor uses sonic belching to blow enemies to smithereens. Epic belch, dude! Meanwhile, Mr. Zurkon is the perfect tag-team partner. He’s a robot who will shoot over your shoulder as you fire with your own destructive weapons. This is all the while spouting off lines like “Mr. Zurcon lives on fear”. Finally, one of my favorite weapons is the Rift Inducer which is a vortex with green thorny tentacles hanging out of it which will pull unaware enemies into it, instantly destroying them. 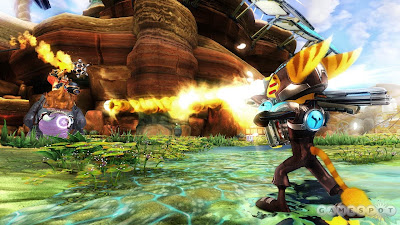 Each time you purchase a new weapon, you get to see an entertaining cartoon version of Ratchet showing off the latest piece of technology to his arsenal in a brief tutorial. This tutorial show what the weapon does and its various uses. You can also find mod kits around the universe to unlock specific upgrades to your weaponry from bombs that unleash toxic fury to pistol shots that can be charged to become more powerful. Meanwhile, switching between weapons is as easy as cycling through the lifeline of Ratchet, the weapon wheel. This pauses the game while you quickly select your next pick of dastardly destruction. 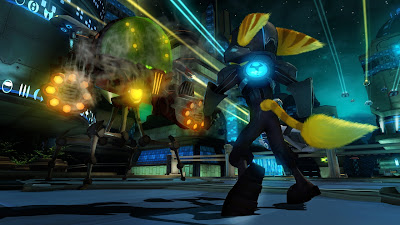 The universe of Ratchet is much different this time around. No longer do you just select a planet and get a cut-scene showing his ship transporting to it. Now there’s a whole galaxy to explore with moons, other ships in need of help, and planets to discover. While most of the story levels in A Crack in Time are more action-focused, the majority of moons– optional locations to survey and explore– are pure platforming. Moons usually house a prize for conquering them from ship-upgrading Zoni to weapon mods to gold bolts– the rarest of the rare in the Ratchet series. The moons borrow from Super Mario Galaxy in that they’re totally 3-D. You can run along all 360 degrees of each cratered rock. While some have the goal of just defeating every enemy aboard the moon, others put Ratchet into platforming peril with plenty of obstacles and hazards to watch out for and jump over.

Spaceship travel is rather easy. One stick is to move around while the other is for the camera and quick evasive maneuvers. You travel on a flat plane, so the only axes to worry about are on the x and z. There’s six areas of space to explore, and once a planet or sector of space is already visited or available, you can directly transport to it. Moons, however, must be approached regardless of whether they’ve been visited or not. Your ship has various weaponry on it from homing missiles to your standard lasers. As you collect Zoni, hidden throughout the galaxy on moons and on planets, you’ll gain the ability to upgrade your ship with new weaponry and bonuses such as higher health and stronger thrusters.

For story missions, Ratchet heads through much more linear levels this time around. There’s usually just one right way to follow on each planet. This isn’t a bad thing as there are very much a ton of hidden items and goods tucked away in the most fiendish of locations. There’s plenty of opportunities for action and platforming throughout A Crack in Time. For every level where you’re in an epic struggle against Nefarious’ forces, the next you’ll be leaping from ledge to ledge and platform to platform. Those who have complained about a higher focus on action will find this installment much more enjoyable to play. 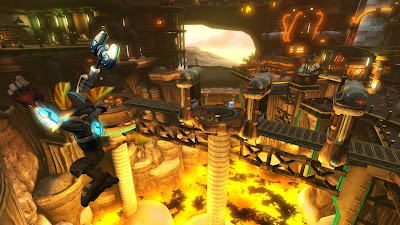 A Crack in Time lasts about ten hours the first playthrough with a challenge mode, a more difficult version of the game with a bolt-multiplier (bolts are the currency of the series), unlocking afterward. There’s also three difficulties to choose from– a first for the franchise. Now any level of player can enjoy this game. There’s also all the moons to discover, Zoni, weapon mods, and new skin-unlocking gold bolts to collect, and skill points to earn. Case in point, A Crack in Time will definitely make you lose time playing it– about 25-30 hours to do everything there is to do.

A Crack in Time’s presentation is what you’d expect from a Ratchet & Clank game. The hilarious Dr. Nefarious is always good for a laugh, and the story seldom takes itself too seriously. There’s plenty of surprises in the plot to keep players interested and entertained. Small things like the R.Y.N.O. V playing Flight of the Valkyrie and the way characters are animated are just superb and make the game feel highly polished. The game itself is absolutely gorgeous. Meanwhile, the soundtrack is quite good with plenty of memorable tracks. The ability to change radio stations as you fly around space is an awesome touch. No matter if it’s rock, funk, or classical, the soundtrack by David Bergeaud has you covered. 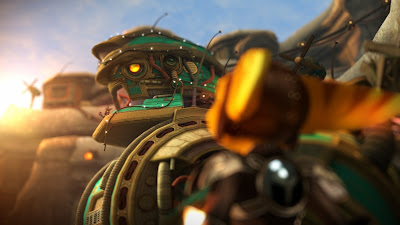 Ratchet & Clank Future: A Crack in Time does a great job of mixing things up and improving on the formula. I was certainly worried that this installment of Ratchet would just feel more of the same after playing through the original trilogy just a little while ago. Thankfully, I can say that this edition of the series does enough to keep things fresh. I’m eager to see where Ratchet and Clank are going to go next. Apparently the old adage is wrong, you can teach an old lombax new tricks!