The original Endless Ocean is now a prized game upon collectors. The game is out of production, and it can set you back about sixty dollars on average for a new copy. For those of us who had an interest in this series late, it’s a breath of fresh air to see a sequel that’s much cheaper and of greater value. Packed with Wii Speak and commanding a thirty dollar price tag, is this an ocean-full of value or a deal doomed for the bottom of the dreary depths?

Endless Ocean: Blue World puts you in the shoes– rather flippers– of a college student on leave to investigate a phenomenon known as the Song of Dragons. It is foretold that any who hear the mysterious melody will have a curse fallen onto them. To assist in investigating is the L&L Diving Company, a grandfather and granddaughter run operation. The father lost his life searching for the treasure revolving around the sinister Song of Dragons, will your character be the next to fall? 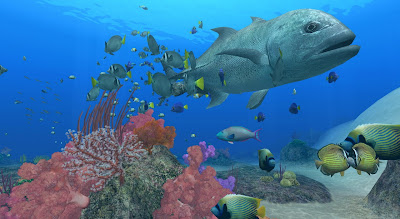 Starting out, you’re given a basic look for your character by answering a duo of questions. This is similar to Animal Crossing except instead the questions are much more direct such as asking what your skin tone is. As you unlock certain missions, you’ll be able to purchase new equipment like tubes that allow you to dive longer, new diving outfits, flippers, and colored oxygen tanks, and alter your hairstyle to make your character all the more you-like. Purchased goods are bought via money either acquired through exploration, salvaging items, and making off the game’s aquarium. 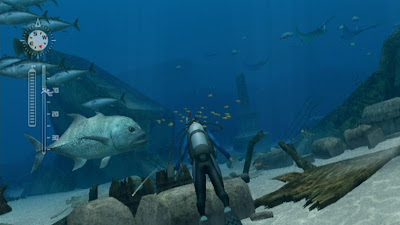 The basic structure of Endless Ocean: Blue World has you investigating certain underwater sights. The map is invaluable for this as the more you explore, the more money you’ll receive from Oceana, the granddaughter in the L&L equation. Though for the story portion of the game, exploring is optional. Though the longer you dive, the more your diving level increases, allowing you to stay underwater for a longer period of time. Thus, it’s a good idea to explore around a bit while simultaneously following the story. When your air approaches empty, you automatically get transported back to the L&L vessel. Regarding the map, a red circle will indicate where you need to go next. You follow to the point, wait for the next story element regarding the Song of Dragons to pop up, perhaps swim around for more clues, and then return the hub of the game, Nineball Island. 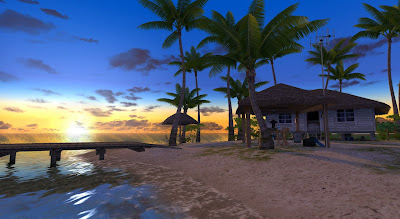 This island is where all the action really happens. There’s loads to do such as training your befriended dolphins, using the journal to scope out any new quests and leads, develop photos taking via your in-game camera, talk to the island inhabitants for new jobs, look at your treasure collection, buy, sell, and appraise new items, and much more. You’ll be returning to this island a lot in between your diving expeditions, and with the short loading times, venturing back to Nineball isn’t as tedious as one might imagine.

Apart from following the story, there’s a massive, almost daunting amount of things to do. You can literally play this game for a hundred hours and still not have seen everything there is to see. The sunken depths of the ocean, sea, and river waters are teeming with life, secret caves, and hidden treasure. One of main side quests is filling up your marine encyclopedia. By examining aquatic life, their data goes into your encyclopedia. There’s hundreds of sea creatures to discover, and most only hang out in certain bodies of water or come out only at night. There’s a vast variety of water organisms to find from mammoth-sized whales to bottomfeeders, legendary creatures long extinct to the common carp, dangerous animals like crocodiles and eels to jellyfish and sharks. These perilous creatures will chomp right into your flesh and bone, ripping your torso apart. No, actually they’ll just strike you and make you lose a portion of your air. Same difference, right? 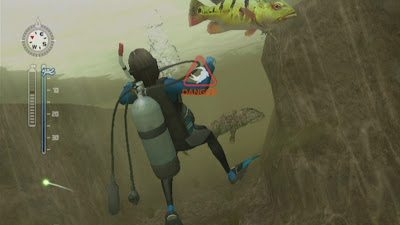 Then there’s the various tools you have to assist you in your exploration of the dangerous deep. There’s the camera that lets you take photos, develop them, and save them to an SD card to share them with friends or the internet. The pulsar is another tool. This sends a signal that ranges from dissuading sharks from attacking you to healing helpless creatures like a depressed dolphin. One tool is perfect for scanning the ocean floor for metallic treasures or hidden passageways. These treasures can be salvaged and then appraised for money and an entry in your treasure catalog. There’s also a marker for drawing messages while playing online or to use like breadcrumbs to keep your bearings. Finally, the sea whistle calls animals over like a mother yelling “dinner” to her hungry kids. No matter the situation, there’s a tool to be used. 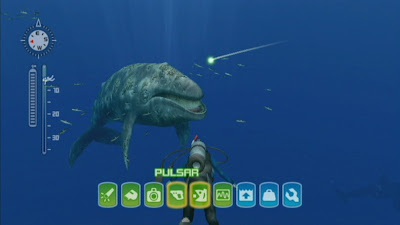 There’s about eight different venues to swim in, and most of these are quite expansive with loads of new aquatic life, treasure, and hidden passageways to discover. Your diving expedition will take you from the Red Sea to the tropical Pacific Ocean to the frigid waters of the Arctic. Each has different creatures to uncover, sights to behold, and breathtaking views. Each locale has various diving locations to start from, so reaching a particular area grows quickly convenient. If traveling by yourself gets you down, you can swim with a diving partner, each with their own specialty such as finding salvageable treasure, informing you of aquatic life, or in the case of a befriended dolphin, giving you a ride.

A game like this would not be a relaxing experience if the controls were frustrating to use. Thankfully, the pointer functionality of the Wii remote gives the game’s controls a second nature to them. You won’t feel like a fish out of water with them. You just point at a side of the screen to turn, much like an FPS on Wii. I would have preferred a faster way to turn around, but what we have already is serviceable. The map is “mapped” to the 1 button for easy access, and you can swim while the map is translucent instead of constantly pausing to see where you are and where you’re going. 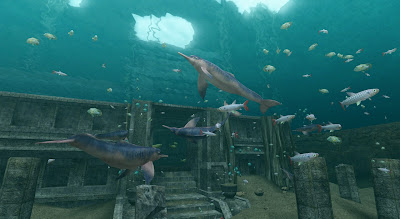 If you’re more of a solo diver, there’s still quite a bit of longevity to be had in Blue World. The main story will take upwards of ten hours while finding all the coins and treasures, befriending every dolphin possible, collecting all of the achievement-like titles, exploring all the locales, documenting every aquatic creature, and seeing everything there is to do in Blue World will take dozens upon dozens of hours to accomplish.

Blue World covers a lot of space, and it does so without any signs of slowdown– something I am a stickler against. Pop-up and pop-in are kept to a minimum, and the ocean landscape is mightily marvelous. Going on land, however, there’s a noticeable difference in quality graphically. It’s still presentable, but it’s not as rich and detailed as the underwater scenes the game has in store for the player. Many times when you visit a new area, you’ll be taken out of the diving experience by a cut-scene, showcasing the area in one or two scenes. This gets irritating when you’re in the middle of a dive, and you trigger a cut-scene while in the middle of doing something else. Just let me swim to myself for once, dammit! Meanwhile, the music ranges from tense orchestral music to the much more common poignant themes, some of which being lyrical. They’re very calming, soothing, and they possess magnificent melodies to match. Those wanting mp3 playback from this installment of Endless Ocean will be deeply disappointed as that feature has been axed in this sequel.

Here’s a game with so much water that one would have to worry about being waterlogged. Fortunately, there’s enough variety in Endless Ocean: Blue World to keep things fresh. If you’re willing to test the waters and play a game that’s focused heavily on diving, then Blue World might just be an ocean worth diving into.