Mario Kart has had a lot of competitors gunning for its position as top karting franchise. There have been many imitators, some better than others, but none really have bested a version of Mario Kart. Offhand, only two can really be thought of, Diddy Kong Racing and Crash Team Racing. That’s all. Now after what seems like ages, SEGA is finally throwing their collective crown into the racing arena with Sonic & SEGA All-Stars Racing for all current gen platforms including the DS and PC. It is pretty safe to say that the number of kart games that have bested Mario Kart is now three.

Sonic & SEGA All-Stars Racing has a myriad of modes to choose from. There’s the standard Grand Prix mode of which there are six cups of four races each with three difficulties to choose from. Then you have mission mode, time trial, multiplayer modes, online modes, and more. Mission mode is a set of sixty-four individual missions where the player is tasked with completing an objective before time runs out. These include but aren’t limited to racing through gates, collecting rings, competing in a three race cup with themes such as all Seaside Hill tracks, attacking Crabmeat badniks with items, and knockout rounds where the premise is that after fifteen seconds are up, last place gets knocked out of the game. This continues until one racer is left standing… er… driving. Players are ranked on performance with a letter grade E-AAA with AAA being the ultimate score one can receive. 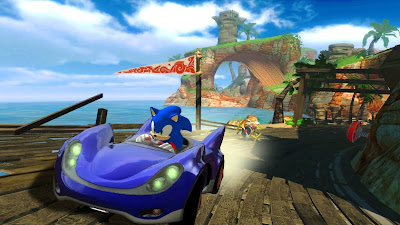 Another mode, time trial, is different from your standard kart racer. It’s nothing we haven’t seen before, but it’s still a bit unorthodox. Instead of racing three laps, trying to score the best time, all players are doing is trying to race and get their best lap. One can race as long as they like to beat their best lap time over and over again. There’s staff ghosts to take on as well as online leaderboards to try to take down the top spot and become the best in the whole wide world. It’s a lofty ambition, but all one needs is a little skill, a little luck, and some quick fingers!

As laps are run and races are raced, players earn currency known as SEGA Miles that can be used to purchased new game content such as new characters, tracks, and music. Tracks purchased can be selected in free race, time trial, and multiplayer modes. The music you buy cannot only be listened to, but you can also choose what song of the forty-plus available pieces of music you which to hear on a given track. You’re limited as to what song can play on what course, however. The music is mostly current songs, so no Green Hill Zone or Scrap Brain for you diehards out there. Additionally, as you earn miles, your racing license levels up in value to show those online you mean serious business. 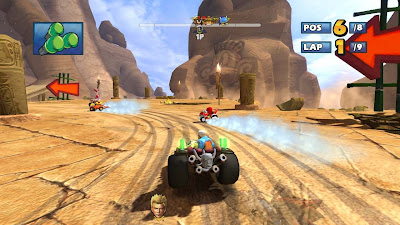 Speaking of the online, it’s pretty easy to find a game. The game gives serious new meaning to the term host advantage by giving the host all power of track selection, AI difficulty, number of laps, and other options. The bad thing about this is that if you have a host who is a jerk, he or she might select the same track over and over again, cause long waits, and just irritate the members of the current room. Thankfully, you can easily create your own room and compete with up to seven other players online. Unfortunately, you cannot take two players online on the same console like you could with Mario Kart Wii. Regardless of this, online is pretty much lag-free, and it’s much more about skill than random luck.

When you’re taking on the best, why not borrow a few ideas (or ten) from them? That’s exactly what developer Sumo Digital did with Sonic & SEGA All-Stars Racing. This is most apparent when it comes to the assortment of items used. Nearly every item in All-Stars Racing has an equivalent in Mario Kart Wii. K.O. Gloves and homing rockets? Green and red shells. Traffic cones? Banana peels. Pocket Rainbow? Blooper ink. What other items there are-are taken from other racing games such as MySims Racing turn-the-entire-screen-upside-down item. However, there is something new put onto the figurative table, and that’s the All-Star ability. When a player is near dead-last with little hope of catching up, hitting an item box may just give them their opportunity with the All-Star item. Each character has a different ability, and when used, the All-Star item can quickly send a character up the rankings in a jiffy! Sonic, for instance, gathers seven of the Chaos Emeralds to turn into Super Sonic, and plow through opponents with ease. Meanwhile, Billy Hatcher leaps onto a colossal egg and rolls over anyone foolish to stand… er… race in his way. All-star moves are fairly uncommon with two or three happening each race. Consider them to be the invincibility stars of Sonic & SEGA All-Stars Racing. They’re fair, they’re balanced– yes, there’s quite unlike a certain news organization! 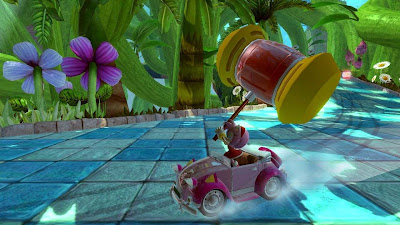 There’s twenty characters to play as once every character has been purchased in the SEGA Shop, which is no easy feat all onto itself. You start with about eight, and while the roster is Sonic-heavy, there’s plenty of cool characters from ones the SEGA knowledgeable will easily recognize to more obscure characters such as Opa-Opa, the Bonanza Bros, and the cute couple from the Japan-only House of the Dead EX. Each character has their own vehicle, but it would have been nice to be able to purchase new vehicles for each character instead of being stuck with just one. Regardless, every character’s vehicle has individual stats in four fields to help players make the right choice on who to play as. Wii owners get exclusive Miis to race as whereas 360 console kings will double their pleasure on exclusives with avatar use as well as Rare’s Banjo and Kazooie. Truthfully though, bear and bird have such rubbish stats that most players will probably skip over them in an instant for the much better characters already in the game. 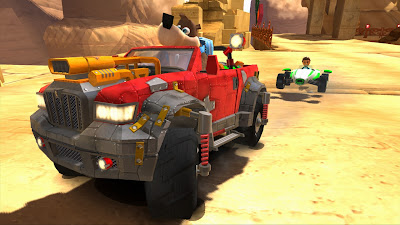 Moving onto the tracks, Sonic & SEGA All-Stars Racing has twenty-four to speed through. Might I add that these are brilliantly and fiendishly designed. You’ll be racing among the peaceful shores of Seaside Hill, driving through the zombie-infested halls of Curien Mansion, taking down the man in Tokyo-to, and much more. Even though only a small handful of properties are represented track-wise (Where’s my Shenmue track? Why is Sonic Heroes the only represented Sonic franchise?), the variety is still staggering. Each track has its own flavor, obstacles, and challenges to watch out for and enjoy. For example, the Super Monkey Ball tracks are just as difficult as the game they were modeled after with sharp hairpin turns, 180 degree turns, and plenty of places to fall to your proverbial doom! Shortcuts also abound which are always a blast to discover. No proverbial doom there, just big reward and precious seconds cut off your time. 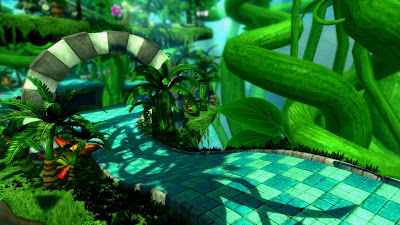 Sonic & SEGA All-Stars Racing couldn’t be simpler to play. Well, I guess if there was a simple “WIN” button, but that’s neither here or there. One button controls the acceleration, one controls drifting, one shoots items, and one allows you to look behind you for any oncoming dangers. Drifting is made simple, too. You initiate a drift. The longer you drift, the longer the resulting boost. You can also perform tricks in mid-air that will give you a boost once you stick the landing. Chaining drifts together showcases impressive talent and is the difference between victory and defeat, so though the controls may be simple, the depth is definitely there.

Visually, Sonic & SEGA All-Stars Racing is very competent. The colors are bright and vibrant, and the game runs at an oftentimes steady framerate of thirty frames per second. There’s some dips when lots of action is occurring, but it’s nothing breaking to the game. Another issue with some of the tracks is the inability to tell where you’re supposed to be going. This is particularly problematic on the more colorful tracks with lots of lights and doodads going on. Not a big issue, but it will be one’s first time tackling one of these tracks. Sound-wise, voice clips taken from previous games in each character’s history are played, and they sound as good as ever. The game’s announcer is entertaining, but for extended playing he’s better left off as he often repeats himself. The music choices could be more varied to past SEGA games instead of much more recent ones. 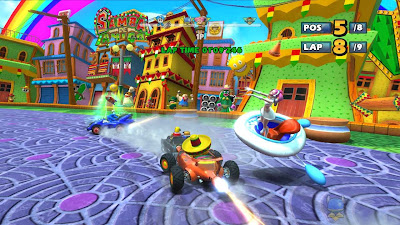 Overall, Sonic & SEGA All-Stars Racing is a very good kart racer, and it’s one without all of the cheapness of Mario Kart Wii. The items are much more balanced, there’s no blue shell equivalent, and all console owners can enjoy the game. Dare I say that it’s better than Mario Kart Wii? I’d definitely say so. The track design is just as brilliant, and you can tell that Sumo Digital studied the design of the Mario Kart series. Depending on whether you care about downloadable content or not, the Wii version is the cheapest console version whereas the HD games will feature the DLC that the Wii will not. For now, Sonic & SEGA All-Stars soars past the checkered flag in first place!