It’s taken awhile, but finally a steady stream of role-playing games are falling into the laps of PlayStation 3 owners. There’s been Eternal Sonata, Star Ocean 4, and soon to be Final Fantasy XIII later this month. Now you can add one more intriguing RPG to the list with White Knight Chronicles: International Edition. Did this knight deserve to be knighted by her majesty?

White Knight Chronicles has you playing as a meager delivery boy named Leonard in the kingdom of Balandor. When a colossal celebration goes awry and the city is under attack, the enemy captures the princess and whisks her away. Meanwhile, Leonard somehow breaks the seal to the fabled white knight, makes a pact with the gigantic suit of armor, and uses it to drive away the enemy forces, longing to take the white knight for themselves. With the princess captured and a city in ruin, Leonard leads a rescue party to take back the princess. The story itself is full of cliches and other eye-rolling moments such as a holographic Leonard and Princess Cisna waltzing on top of a lake. There’s your typical do-gooder hero, the bubbly pink-haired girl, the mysterious old man, the cocky comic relief, and the snark-filled dancer. Some players will be put off by the cliches, but I happened to enjoy them. Of course, constantly having the princess fall through the cracks and get kidnapped again reminded me of a certain portly plumber’s ordeals in 1985. 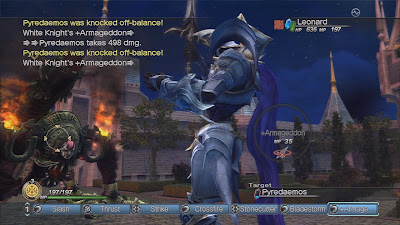 Then there’s you. At the beginning of the game you create your avatar, the person who will accompany Leonard and friends on their journey. You can adjust the sliders, customizing everything from brow height to shoe size. You can give your avatar a voice to use in battle, and countless other customization options. Unfortunately, your avatar will constantly be playing the role of the third wheel with no influence on the story at all. I would have loved to seen my avatar as the hero of the story instead of that wimp Leonard, but c’est la vie.

Game progression couldn’t be simpler. You explore towns, gather items, weapons, and skills, talk with the locals, gain clues on where to go next, watch a cutscene, go to the next dungeon, watch another series of cutscenes, and repeat the process over and over. A helpful map assists you in guiding the way with a star on the map detailing where Leonard’s team has to go next. Even on the world map which is just made up of locations to select from shows where you need to go next on your arduous adventure. 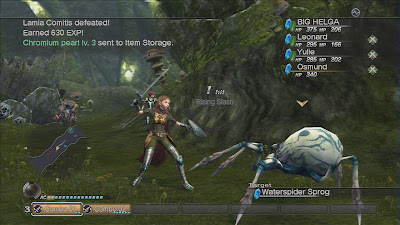 The main single-player mode takes around twenty hours to complete, and that’s just with no dilly-dallying included. When the game is completed, a new game plus option opens up for players to sink their tenacious teeth into. This mode carries over all of your weapons, armor, items, money, and experience levels as you play through the game all over again only this time with new treasures sprinkled throughout the games many expansive, incredibly long dungeons. New weapons and armor show up in-game, worn by your characters, which is a very cool touch to keep things interesting.

If the single-player campaign isn’t your cup of tea, you can try one of the fifty some-odd quests that can be played solo (for more experience and money) or with up to three other players. These quests are varied and all have a one-hour time limit to them. Some will have you slaying a certain boss monster while others will have you interacting with the environment to solve simple puzzles. As you complete quests, you earn points. The more points you earn, the more your guild rank will go up. The more your guild rank goes up, the more quests and equip-able weapons and armor will be available to you. Unfortunately, this can be quite a grind involving players to boost through the same mission(s) ad nauseum in order to level up. Playing online with friends or strangers is easy with you either creating or joining a quest from the world map screen. Players can communicate with keyboards, voice chat, or good old fashioned emotes. 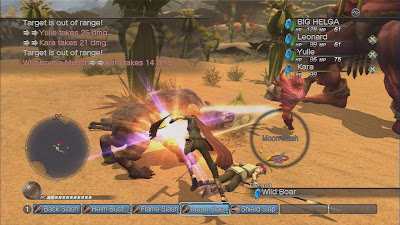 Speaking of grinding, you’ll do a lot of that to level up experience wise, too. There’s no better way to do that than combat. Combat involves a free-roaming active time battle system. You probably just said “what” to yourself right now. That is, you freely roam around areas, hacking and slashing enemies. When you see a monster, you press the attack button to enter combat. When the circular gauge fills up, it’s your turn to attack. The process continues until all monsters and enemies are slain. Combat isn’t as fast-paced as I would have liked, and it can feel pretty clunky at times. Regardless, once one gets used to it, it works like a charm.

There are two types of points used to attack: action chips and MP. Action chips slowly regenerate allowing your party to perform more powerful moves and combos. MP is used for things like magic spells and some abilities. Each move takes a set amount of action chips to perform, and when they run out you’re stuck using basic attacks like hack and slash. You can combine attacks into one combo that deals massive damage– and not just to giant enemy crabs either (old joke– kill me). 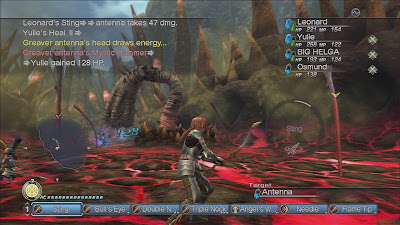 In battle if Leonard has enough action chips in his possession, he can transform into the towering white knight mid-battle. This makes a lot of fights incredibly easy– more so than they already are. The suit of fabled armor is nigh-indestructible, and it only makes things easier when a second party member can turn into a knight. 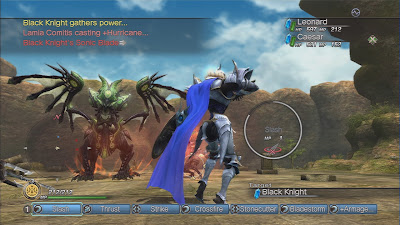 Each time a character earns a new level they earn skill points which can be used to tailor your character’s skills as much as you like. Want them to be a divine magic user? Spend skill points on white magic. Want them to be proficient with a long sword? Spend skill points on long sword abilities. Apart from new attacks, there’s also stat bonuses to earn, too, such as increased strength or speed. You can outfit your characters to be as similar to different as you want. 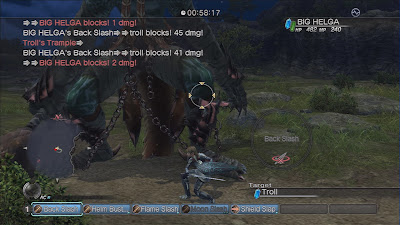 White Knight Chronicles is a gorgeous game. The towns and dungeons are impressively huge with lots of things going on in them. There’s the occasional dip in framerate, but overall the presentation package is top-notch. Most of the time cut-scenes are in-game showing off your custom armor and accessories equipped, but sometimes you’ll get a CG cut-scene thrown in for important scenes. The soundtrack is orchestral, and if you’re not sick of the battle theme by the end of the game, I salute you. The rest of the score is largely forgettable with one or two tracks sticking out.

Ultimately, White Knight Chronicles: International Edition is a worthwhile purchase for any RPG-starved PlayStation 3 owner. It certainly has enough content, longevity (good luck getting half of the trophies), and fun to last players into the hundreds of hours. While the game is a tad on the easy side, with a cliched story and cast of characters, and there’s a metric ton of grinding to be had for those who enjoy that kind of thing, White Knight Chronicles is an intriguing take on the RPG genre. Just don’t be surprised when you find out that once again your princess is in another castle.

Full Suit Document Of Infinity Ward Against Activision Released
For Edge, Final Fantasy XIII Is Mediocre At Best, Gives It A 5/10