It was a long while since gamers got to play a brand-new Mega Man game under the classic moniker– a decade and then some. Then Mega Man 9 came out and kicked the butt of many-a-gamer including yours truly, with its oftentimes cheap level design and hardcore sensibilities. Now a year-and-a-half later, Capcom and developer Inticreates (Mega Man Zero, Mega Man ZX) have once again partnered up for an all-new entry in the classic Mega Man franchise, Mega Man 10. Has the difficulty been toned down enough to let the rest of us enjoy the game?

The story of Mega Man 10 is as simple as the run, jump, and gun gameplay. A mysterious virus has spread out among robots, causing them to grow deathly sick including Mega Man’s sister, Roll. It’s gotten so bad that even Dr. Wily’s robots have turned on him. Seemingly forgetting all the times Wily’s tried to take over the world, Mega Man and company agree to work with him to help develop a cure to the roboenza virus. How did the virus break out, and who is behind it? The answers aren’t as difficult to solve as one might think with a twist even Sarah Palin could see from her front porch. 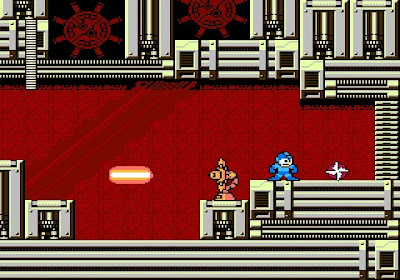 Mega Man 10 plays just the same as past entries with little innovation. That’s all right because the tried and true gameplay still works wonders. You select from one of eight robot master stages with names like Blade Man, Nitro Man, Chill Man, Strike Man, and even Sheep Man. Each stage has its own tricks and traps to watch out for. For instance, Commando Man’s stage has devastating sandstorms that cover up the screen and can push Mega Man into shrouded spikes and bottomless pits. Meanwhile, Chill Man’s stage is covered in ice, making for some slippery platforming action. It also has ice cubes that break apart after being jumped on twice. Each stage is about five minutes long if you’re taking it easy, and they’re all pretty much linear excursions, some with split paths to beef up the game’s longevity along with online leaderboards, challenges, and bonus stages. 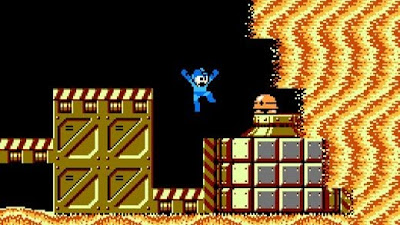 Levels are much more fair this time around. That isn’t to say the game isn’t difficult as it definitely is. It’s just difficult in a different way from Mega Man 9. Where Mega Man 9 had its share of cheap deaths, Mega Man 10’s levels are deviously constructed that you know how you have to proceed through the level, it’s just that knowing and doing are two completely opposite things.

Between levels, Mega Man can use bolts collected from dropped enemies and assorted in specific locations in levels to purchase new gear. These range from tanks that restore Mega Man’s life and/or weapon energy, extra lives, one-time use items such as those that allow Mega Man to be hit by one spike trap without dying, and even the ability to play without the blue bomber’s helmet.

The classic Mega Man series has always had a rock-paper-scissors quality with its bosses, and Mega Man 10 is no exception. When Mega Man defeats a given robot master he acquires their weapon. That weapon is weakness of one of the remaining seven robot masters. The trick is to carefully choose the robot master that the weapon is useful against. Otherwise, you’ll be stuck using the good old mega buster to take them down. Nearly every enemy in the game is weak against one of the weapons. Through experimentation will players find what weapon or weapons takes out certain enemies. It’s just one of the many fun things about the series. The weapons range from a water shield that sprouts a ring of bubbles around Mega Man, a giant cluster bomb that can blast through certain walls holding cool power-ups like extra lives and energy tanks, and a storm cloud that rains down a bolt of lightning from above.

This time around, a Mega Man game has three difficulties: easy, normal, and hard. Hard is exactly what it sounds– hard. There’s more enemies, more traps, and enemies take and give more damage. Normal is the standard difficulty, but it’s still quite troublesome. It’s more fair this time around with less cheap “how I was supposed to know that was coming” instances. Easy is great for newcomers to the series (actually Mega Man 1-8 is great for newcomers) featuring more helpful items dropped by enemies and placed in levels, platforms covering up most spiked floors and bottomless pits, more places to save your game, and less damage given to Mega when he is attacked. Regardless of your skill level, there’s a mode for you in Mega Man 10. There’s even a character for you depending on your playing style as now Proto Man is available to be chosen right from the get-go. He can charge his buster and utilize his shield, but he takes double the damage of Mega Man. 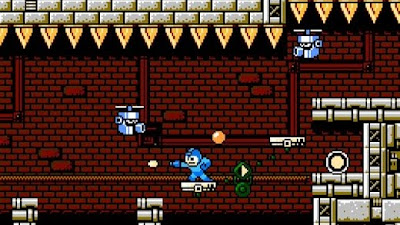 Mega Man 10 can be played either with the Wii remote held sideways or the Classic Controller. I preferred the Classic Controller as you can cycle through weapons with the shoulder buttons, something that can’t be done with the shoulder button-less Wii remote. The controls are as simple as the game itself. You run with the d-pad, jump with one button, shoot with the other, and use the pause button to switch weapons and use items. Meanwhile, the PlayStation 3 controller feels optimal for this type of game whereas the 360’s d-pad makes playing with an analog stick the only solution. In addition, the Xbox Live Arcade version comes out late this month a full 3-4 weeks after the Wii and PS3 versions. Really, unless you can’t wait to share your achievements with friends over Xbox Live, the WiiWare or PSN version is the way to go.

Capcom and Inticreates opted to keep the retro theme with classic 8-bit visuals and audio. It’s certainly plenty nostalgic to play a new game with old graphics, but one could argue that this approach is simply laziness. I couldn’t argue against that, but I do find the 8-bit graphics charming all the same. The music has some catchy themes here and there like Solar Man’s stage, for instance, but most of the music pales in comparison to Mega Man 9. Overall, what we are left with is a finely-crafted package of presentation that most fans with go gaga over. 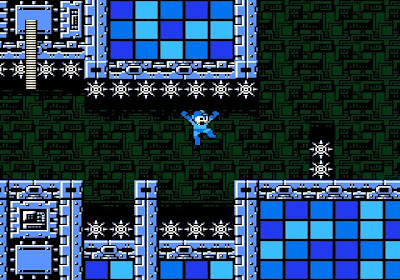