Sonic the Hedgehog’s gaming history is vast and varied. There’s the good such as the titles listed in the Sonic Classic Collection for the Nintendo DS, and then there’s the long list of bad. SEGA, being too busy and/or incompetent to emulate their own games contacted a third-party to do so, choosing the majority of Sonic’s Genesis days to port to the DS. Is this collection one that you’ll want to keep in your own collection?

For those who have never played a 2D Sonic game, it’s really pure bliss. The early Sonic games are all about a perfect balance of speed and precision platforming. While the Green Hill Zone is all about scampering to the end of the level, the Marble Zone is more about slow, controlled jumping and timing. Rings are the lifeline of Sonic the Hedgehog. If he’s caught without a ring and he gets hit, Sonic loses a life and has to start at the nearest checkpoint. No worries though as there’s plenty of rings to be found and collect with 100 giving him an extra life. There’s also chaos emeralds to collect which are purely optional, but these give way to secret content and special endings within each Sonic game. Overall, if Mario is too slow, try the speedy blue hedgehog for a change instead. 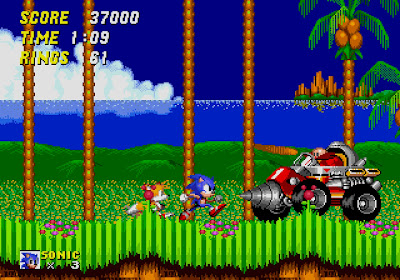 To delve into the history of the Sonic titles, the first Sonic the Hedgehog game used “blast processing” as a marketing buzz term. What does it really mean? Well, nothing. It was just a cool term to tell the kiddies into buying Sonic’s first adventure. The game was blazing fast, and it was common for SEGA to market that while Mario, Sonic’s once main competitor (his main competitors now are incompetent developers), was slow, Sonic was blazing fast. And indeed he was. Each of the six themed zones concluded with a boss fight against one of Dr. Robotnik’s mechanized monstrosities. Unlike later Sonic games, Sonic 1 would utilize a three act, or level, structure to each zone. There was also the ability to collect six chaos emeralds in a rotating maze. Collecting all six would give the player the ability to see the secret ending.

Moving onto Sonic the Hedgehog 2, this title was bigger and arguably better than the previous game. It had more zones, more enemies, and a new partner for Sonic by the name of Miles “Tails” Prower (a take on the phrase Miles Per Hour). Tails, as he preferred being called, could temporarily give Sonic some extra height by flying him. This and further games would allow two player cooperative gameplay though Sonic Classic Collection does not have this in any of the games. This time when all seven (one was added) chaos emeralds were collected through playing down a bobsled-like course collecting rings and avoiding mines, Sonic could transform into the ultra-powerful Super Sonic. He had faster speed, but lost rings at a steady pace. When his rings were depleted, Sonic would revert back into ordinary but still butt-kicking mode.

Sonic the Hedgehog 3 moved the festivities to Angel Island where Dr. Robotnik was at it again. This time a feisty echidna named Knuckles would constantly get in Sonic’s way, stealing his chaos emeralds, destroying bridges, and doing everything he could to stop Sonic from going after the Master Emerald. Unfortunately, Knuckles had been tricked by Dr. Robotnik. It was actually Robotnik who wanted the Master Emerald! Like Sonic 1, Sonic 3 was six zones long ranging from dense jungles to circus carnivals to underwater cities. Each first act concluded with a battle against a mid-boss while act two always ended with a battle with Dr. Robotnik himself. Originally, by putting the Sonic 3 cartridge into the Sonic & Knuckles game cartridge, a brand-new adventure awaited Sonic, showing the true ending to the Sonic quadrilogy. 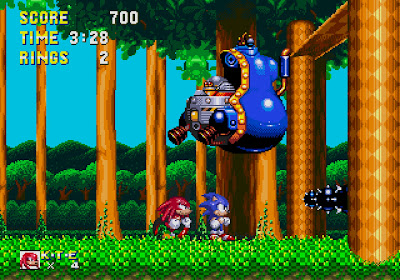 Sonic & Knuckles allowed players to choose from either Sonic or Knuckles as you played through six more zones ranging from hot deserts to active volcanoes! Linking up to Sonic 3 with the Sonic & Knuckles cartridge allowed players to play though both Sonic 3 and then Sonic & Knuckles with all of your chaos emeralds intact. In fact, one could collect the seven Master Emeralds to transform into an even stronger version of Super Sonic or Hyper Knuckles. For Knuckles, the adventure ended in the Sky Sanctuary where he’d face off against Mecha Sonic while Sonic would have one more zone to go through before entering the Doomsday Zone where he’d take on Robotnik in a timed space battle as Super Sonic.

On the technical side of the things, the resolution of the DS just isn’t enough when compared to the Genesis. To fix this, the screen was squished to make the proper resolution work for the games to run. It’s a noticeable difference, but nothing too bad. Incidentally, there’s something to be said about the amount of glitches and slowdown. Once I fell straight through a floor in the Green Hill Zone and died. It’s odd when SEGA isn’t even competent enough to handle emulating their own games that they have to give their games off to one contracted person to do them. 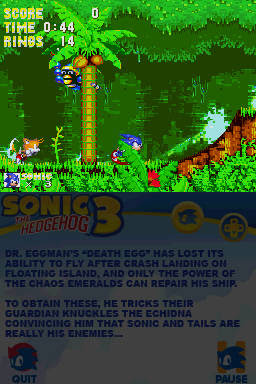 Regardless, Sonic Classic Collection is very much bare bones in its extras. You get some art, and that’s it. I would have liked to have had a jukebox to listen to the game’s music or something of that design. Additionally, if this is a Genesis/Mega Drive collection on-the-go, then why isn’t there Sonic 3D Blast or– stretching it a bit– Sonic CD to play? Still, if you must have four Sonic classics to play with you in the palm of your hand, you can’t do much better than Sonic Classics Collection.

Ultimately, with all of the collections and games featuring the Sonic Genesis/Mega Drive games on it, did we really need another so soon? Sure, this is the first time you can play a non-buggy (for the most part) Sonic the Hedgehog, Sonic the Hedgehog 2, Sonic the Hedgehog 3, and Sonic & Knuckles on-the-go in portable form. If the thought of playing Sonic the Hedgehog 3 on the toilet or in the car on a long vacation ride to Branson has you salivating, then definitely pick up this collection. For everyone else, there’s too little additional content to justify the thirty dollar price tag– especially when you can get Sonic 1-4 plus other games for the same price on the PlayStation 2, Gamecube, Xbox, and Wii Virtual Console.

NPD February VG Results: We Fall Down But We Get Up
Side Note – PlayStation: The Official Magazine Reveiw Scores