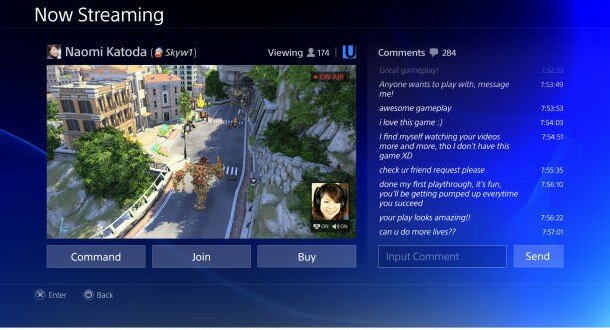 A much fluider experience compared to its predecessor.

During the launch event at New York that IGN attended, Sony pulled the curtain on the revamped user interface of the PlayStation 4.

A considerably more social approach to the interface is evident from the boot-up. You are first greeted with a screen of all the available player accounts, represented by a big, high-res image each, and can be both an icon or a photo. You can configure the system to boot directly for a default user, if there’s only one. Facial recognition is supported, thanks to the new Camera the system houses. A one-time calibration is needed to save your facial characteristics, and false or unintended logins are prevented by having the players raise the DualShock 4 into view — neat security there. Guest accounts are also there, which lets friends create a temporary account to play with you and is erased afterwards.

Not unlike the XMB, everything is presented in a horizontal, linear fashion, with a “What’s New” tab which feeds information from your friends’ latest activities, which could range from screenshots and status updates to captured clips. Like the PS Store, it is image-heavy, but pretty to use and look at. Getting to watch clips is instantaneous, save for slow connections and network problems on the player’s side.

The best thing is the UI’s overall speed though; where PS3 was cumbersome and had a few seconds of loading times for some menus, the PS4 managed to load the browser, a video, party chat or anything really with no delay. Games are the only thing that get a tiny bit of time to load, given their huge size. The home button on the DualShock 4 allows you to quickly go back to the dashboard, or multitask, going between your two most recently used apps. Think Wii U’s home button; you press it, go into the browser, find a guide for the game, press it again and you’re back into the game. A neat addition is that double tapping it lets you swap between the two apps in an instant.

Party and messaging have also received an overhaul. Cross-platform, real-time text, picture and audio comms are now present, with chat and messaging being cross-platform. PS Vita, PS4 and smartphones equipped with the PlayStation app can “talk” with each other. Typing is, as usually, mapped to a virtual keyboard, but now you have the ability to use the DualShock 4′s motion sensors to navigate a cursor on the screen.

Trophies are now dynamically rated, too. Apart from their bronze, silver, gold and platinum ranks, they can now range from common, rare, very rare, and ultra rare depending on how many people have acquired it. Awesome for trophy collectors like myself. Better bragging rights!

You can show these trophies to up to 2,000 friends, an upgrade from PS3′s 100, and you can use your real name as well, but you can choose who can see it, even if they’re on your friend list.Video and streaming tools like Twitch and UStream, which are integrated into the console, can capture high-definition videos and picture-in-picture through the Camera without having to rely on third-party software/hardware. While it’s not as feature-heavy as other solutions, it allows you to change the quality and format of the broadcast. A Twitch browser is included, which shows ongoing streams fullscreen and allows you to search for specific players. Favorites and the like are not supported at launch, though don’t cross them out for the future.

The last 15 minutes of every game are automatically recorded, and can be edited into smaller clips and published on Facebook and Twitter or PS4 news feeds. Privacy settings and distribution lists can be edited, even for Facebook sharing. They can’t be exported into HDD or USB drives at launch, but Sony is looking into it.

The PSN Store is, once again, very dependent on images. Everything that’s there day one can be purchased through the Store as well, for those who don’t like the retail option. You can also change the priority of downloads and even their modes; Sony showcased the downloading of Call of Duty: Ghosts’ multiplayer portion and putting the campaign on hold for later.

Movies and media are now on the cloud, so don’t worry about downloading anything of that and filling up your HDD.
Lastly, players can set their system to download updates in standby mode and be powered up remotely, which comes in handy when you purchase content through a browser or the PlayStation app, and let your console download it and have it ready when you’re back home.So, what do you think of the radical changes to the UI?

Previous: Your PS4 Installs Can Be Prioritized Based On Single or Multiplayer
Next: Call of Duty: Ghosts PS4 Versus Xbox One Visual Comparison