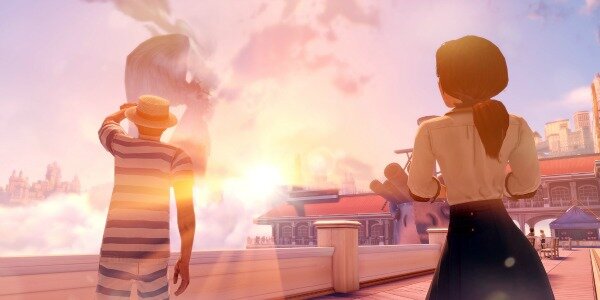 IGN’s been granted the first exclusive review of Bioshock Infinite and, needless to say, the site’s proven the game to be a hit. It’s flying high, people. A must-buy effort from Irrational Games. Review score and snippets of the reviewer’s findings inside.

Elizabeth herself, in fact, plays a central role in Bioshock Infinite’s story, and in the moment-to-moment experience. Once she’d established herself at my side, any period of separation was noticeable. Not only does the action revert to feeling very much like BioShock 1, but it made me feel as if something was genuinely missing: emotional depth. Over our time together, Elizabeth’s expressive performances elicited everything from sympathy to fear and even guilt. She provides motivation and moves the story forward, and like the clear bond the Big Daddies and Little Sisters had in the first game, I was compelled to protect her. And from a purely mechanical perspective, it’s a half-miracle that she never gets in the way – but she doesn’t. What’s great about Elizabeth is that her presence always adds something, and never takes anything away.

And what of the rank-and-file bad guys you’ll be shooting at? Some of them seem borderline comical, like the Patriot robots modeled after George Washington, who Columbia’s residents revere as a god. Then there are the Handymen — intimidating 10-foot-tall proto-cyborgs who freaked me out the first time I thought I’d escaped them but, in fact, hadn’t. They’re much more agile than they look, even if they’re essentially bullet-spongy Big Daddies on PEDs. At least the AI is wise enough to use cover and the Skylines to keep you on your toes and even the odds.

From the moment you begin fighting your first barely competent Columbia cops early on, vigors – nee plasmids – bolster your offense with potent table-turners like the target-zapping Shock Jockey or Charge’s directed speed burst. My go-to, Bucking Bronco, floats targets up in the air for a few moments, letting you pick them off like (paralyzed) fish in a barrel. Some vigors are essentially reskinned abilities from the first BioShock, and all are familiar from one game or another; the ability to charge them up to lay them down like mines is the only thing that really sets them apart, though I rarely saw fit to use their secondary functions. But they’re a useful toolset, and odds are you’ll find a couple you favor above the others — particularly in their impressively powerful upgraded forms.

Going in, I had to question whether Infinite could live up to the BioShock name after having discarded its signature world of Rapture, with its Big Daddies and Little Sisters and warring philosophies, and starting from scratch. On the way out, I’m forced to seriously question which is the better game. In total, Bioshock Infinite is a brilliant shooter that nudges the entire genre forward with innovations in both storytelling and gameplay. It trips over itself in a couple of spots, but not in any way that should keep you from embracing it with your utmost enthusiasm.