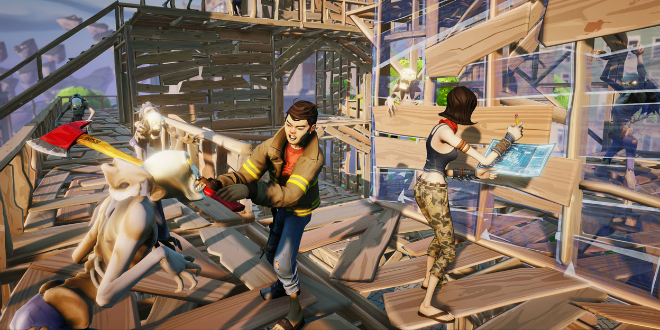 Three years after its reveal, Epic Games’ Fortnite, the colorful base-building monster-survival action game is finally ready for primetime once more, and per a GameInformer Magazine reveal, we’ve been treated with fresh gameplay.

There’s an alpha signup page as well for those who’re interested in becoming testers.

Fornite will remind you of Borderlands with its color-rich theme, in the way damage numbers pop out of enemies’ heads and in the way there’s oodles of loot to collect. There’s also base building, inspired by – but not as complex as – Minecraft, and apparently it’s fast and fun to do.

Worlds are procedurally generated, there are multiple campaigns of varying lengths and there’s an RPG progression system glueing it all together. Epic Games has also promised player versus player battles, so we look forward to learning more on that front.

It’s worth mentioning that the game’s free-to-play, and only PC has been confirmed as a platform for release.

Previous: Borderlands 2 For PS Vita To Launch In May
Next: Sony Finally Confirms The Last of Us Remastered For PS4, Boasts 1080p Visuals