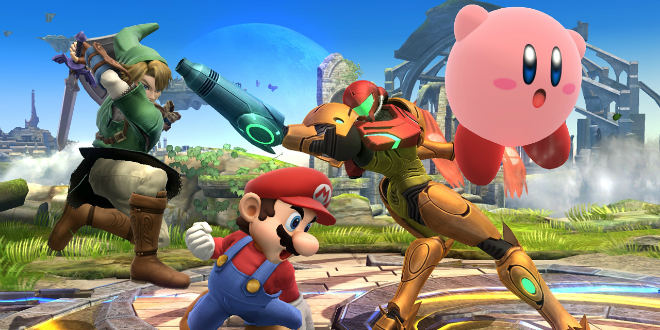 Everything You Need To Know About Super Smash Brothers, Plus New Trailer

Posted by: Ernice Gilbert April 9, 2014 in News, Nintendo, Wii U Leave a comment

Super Smash Brothers got a big reveal today, with lots of information being spread about the internet. But what if there was one place you could consume all the content that was revealed today, including the new trailer — would you like that? Well you’ll like this post, then, because below you’ll find all the information released about the upcoming game.

Nintendo Direct video revealed numerous details about the upcoming Super Smash Bros. video games for the Wii U and Nintendo 3DS systems. At the start of the video, series creator Masahiro Sakurai announced that the launch of the Nintendo 3DS version of the game is planned for this summer, with the Wii U version planned for winter 2014. Both games will be available in stores and in the Nintendo eShop for their respective platforms. Sakurai also detailed many of the stages and items in both versions, described the games’ online functionality, revealed a new mode exclusive to the Nintendo 3DS version and announced fan-favorite Greninja, a Pokémon from the Pokémon X and Pokémon Y games, as a new playable character.

“New Super Smash Bros. games are a major event for video game fans everywhere, and present an experience that only Nintendo can offer,” said Scott Moffitt, Nintendo of America’s executive vice president of Sales & Marketing. “Fans have two launches to look forward to this year, and they will want to get in plenty of practice with the Nintendo 3DS version so that they can be prepared for the launch of the Wii U game later in the year.”

• Silky-smooth 3D: Most game-play elements of the Nintendo 3DS version of the game will run at 60 frames per second, all in stereoscopic 3D.

• “Smash Run”: Exclusive to the Nintendo 3DS version of the game is a new mode called “Smash Run.” In this mode, four players have five minutes to enter a dungeon and explore the surroundings, fight enemies and obtain power-ups to enhance their fighters. Once the five minutes are up, all four fighters enter a battle arena using their newly equipped items and power-ups. Enemies encountered in the Smash Run mode are from a wide range of game series. Multiple Nintendo 3DS systems and games are required for multiplayer modes.

• New challenger!: Greninja, the awesome final evolution of Froakie from Pokémon X and Pokémon Y, joins the roster as a playable character in Super Smash Bros. for both Wii U and Nintendo 3DS.

• Oldies but goodies: Many of the classic characters from past Super Smash Bros. games that are returning in Super Smash Bros. for Wii U and Nintendo 3DS have new powers and abilities. Four characters that have appeared in previous games, but had yet to be announced before this Nintendo Direct, include:

- Zero Suit Samus: That’s right, Zero Suit Samus is back, but this time she is her own fully playable character, separate from suited Samus. In the new game, she is given jet boots to make her even more powerful.

- Sheik: As with Zero Suit Samus, Sheik is another character that appeared in previous Super Smash Bros. games, but will be a unique playable character for the first time in the new Wii U and Nintendo 3DS games. Sheik has new moves like Burst Grenade and Bouncing Fish.

- Yoshi: In previous games, Yoshi stood on two legs and hunched over, as if Mario were going to jump on top of him at any moment. This new version of Yoshi stands completely upright, making him an even stronger fighter.

• Online play: Both the Wii U and Nintendo 3DS versions of Super Smash Bros. will offer online multiplayer game play with other players on the same platform. Players with broadband Internet access can battle it out with anyone else who is online and also has the game.

- When playing with random players online, two modes are available: “For Fun” and “For Glory.” In “For Glory,” only Final Destination stage variations are available. There are no platforms, elevated areas or items in this mode. It is a nice, clean battle between characters. In “For Fun,” all stages are picked randomly and all items and power-ups are available.

- When playing with friends, full customization is available – players can set the rules, stages and items however they want.

• Variety of stages: While the cast of playable characters is the same in both versions of the new games, the stages where the battles take place are vastly different, depending on which system a player chooses. The Wii U stages are primarily based on past home console games, while the Nintendo 3DS stages draw from hand-held games for inspiration.

- Boss characters, such as the Yellow Devil in Dr. Wily’s Base, will make appearances in some stages. When bosses appear, fighters will have to battle the boss, as well as one another. The boss can even be used in strategic ways to damage other fighters.

- Almost all the stages in both versions of the game will have a “Final Destination form,” an alternate form of each stage that is inspired by the relatively simple layout of the much-loved Final Destination stage.

• Get connected: There will be elements in Super Smash Bros. that link both versions of the games. More details about this will be revealed at a later date.

• Custom moves: In a series first, players can now customize move sets when playing locally or online with friends. More information about this feature will be announced in the future.

Previous: New Wolfenstein Trailer Thrills, Includes Football Reference
Next: You Can Now Preorder The Last of Us: Remastered Edition For PS4 On PSN