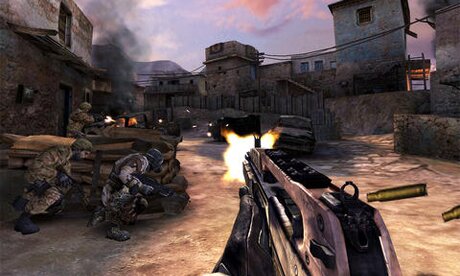 An iOS exclusive, with tons of in-app purchases.

Call of Duty: Strike Team is a Call of Duty tailored for smartphones and tablets, and represents Activision’s biggest push in the mobile market thus far.

Tokens can be earned by playing the Survival mode, playing on consecutive days, levelling up or playing the campaign.

“The year is 2020. Tensions run high amongst the world’s superpowers. In a surprise attack, the U.S. finds themselves in a war with an unknown enemy. Your mission is to lead a Joint Special Operations Team in a global effort to hunt down those responsible.”

Featuring first-person and third-person shooting gameplay, Strike Team allows people to easily transition between the two in order to tackle ground-level combat or co-ordinate the squads.

A campaign “full of epic, cinematic moments in diverse locations around the world” is offered, alongside a Survival Mode where you can “put your skills to the test as you fight off waves of increasingly difficult enemies” and “compete against family, friends and the Call of Duty: Strike Team community for leaderboard domination.”