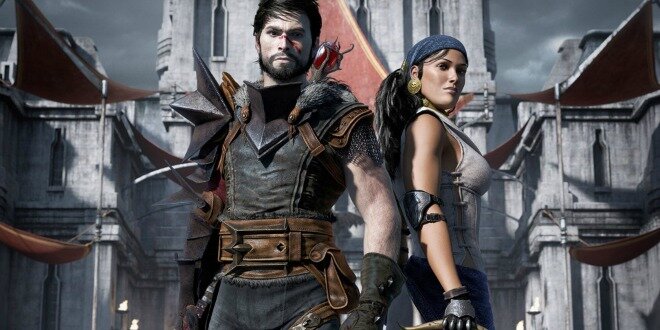 EA and BioWare announced Heroes of Dragon Age, an iPhone and Android game due out this year. Using the freemium model, players can purchase and collect 3D figures of characters from the vast Dragon Age universe, form a team, and battle human and AI-controlled enemies.

Executive Producer Jeferson Valadares spoke to IGN about the game.

“We all like CCGs, RPGs, and squad-based tactics games, but they can be a little niche. The idea for Heroes of Dragon Age was to take those ideas and make them more strategic. We set out to make an accessible strategy RPG that takes full advantage of the Dragon Age universe’s cool characters and locations.”

HoDA will not tell any new stories, but will instead focus on “What If?” scenarios that will keep the action going. Every quest is self-contained and will allow players to relive significant moments from the Dragon Age timeline, be it games or books. You can have Alistair and Morrigan fighting alongside Darkspawn, for example.

HoDA will launch with more than 100 unique characters, each with four potential variations and evolutions. After the game’s launch, the character count will increase, adding characters from Dragon Age: Inquisition, among other, unexplored bits and pieces from the series’ lore.

“Characters are sorted into four different factions and have rock/paper/scissor-style pros and cons. Players construct their team and pick their placement ahead of time and the battles then play out automatically. The planning stage still keeps everything strategic. You might want to keep multiple squads on hand that are optimized to take down specific types of opponents, for example.”

“Everything is available just through playing – nothing is locked off. Players that spend money can just increase their odds of getting rare characters. Fairness is very important to us,” said Valadares, regarding potential pay-to-win issues.