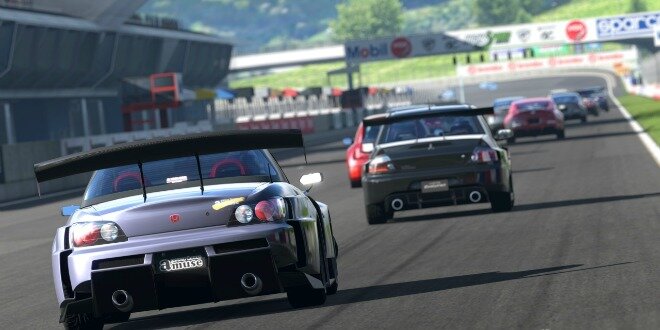 GT6 will most likely be revealed tomorrow at a special 15 year anniversary event. But before we take the plunge forward, Sony’s prepared a nice article detailing the bestselling series’ ride across platforms, from PSone to PS3 – and in the future, PS4. The full article can be quenched below.

Back in 1998, the European box art for Gran Turismo on PlayStation featured a mysterious supercar covered in cloth. Beneath that cover was the start of the most successful series in PlayStation history; one that would redefine the driving genre with ultrarealistic graphics and handling.

Gran Turismo fused the excitement of arcade racing with the realism of a simulation and boasted nearly 200 cars – far more than any other racing game at the time. Players could test their skills to obtain the racing licences that allowed them to compete in events, and prize money could then be spent on the world’s most luxurious cars plus new parts to tune their performance. This level of detail had never been seen before and soon Gran Turismo was the talk of the real-life racing world as well as the gaming one.

The evolution of a driving experience

Gran Turismo 2 followed two years later, upping the stable of cars to an astonishing 650, thanks to the enthusiasm of the series’ creator, Kazunori Yamauchi. As a connoisseur of cars both classic and new, he helped forge a close bond between developer Polyphony Digital and the car manufacturers themselves.

“Relationships with manufacturers have always been very important,” explains Yamauchi. “And that’s because the cars which we cover in the game are something that is open to society. Gran Turismo is always looking to communicate with the world outside of the games industry.”

PlayStation 2 arrived in Europe in 2000 and the world waited to see how Polyphony would use the new hardware. The answer came a year later with Gran Turismo 3: A-Spec, a game that would make casual observers do a double take when they found out they were watching a video game rather than a real race.

Before Gran Turismo 4 arrived there was Gran Turismo 4 Prologue, which gave a taste of the next major evolution in the series. Launched in 2005, Gran Turismo 4included more than 700 cars from 80 manufacturers, from the 1886 Daimler Motor Carriage to concept cars looking as far ahead as 2022.

The game also introduced B-Spec mode, allowing players to move away from the driving seat and into the role of race manager. Driving missions were another new addition to Gran Turismo 4, challenging drivers to perfect certain racing skills such as slipstreaming.

Gran Turismo players in Europe started their first online races in 2008 thanks to Gran Turismo 5 Prologue on PlayStation 3. It was the first game in the series to include network features such as online racing, leader boards and GT-TV, a service that allowed players to watch motorsport programmes in-game.

Take it to the track

Gran Turismo 5 Prologue also unearthed a potential star in Lucas Ordoñez. The winner of the inaugural GT Academy – a search for the fastest GT players in Europe – went on to earn his racing licences, compete in the Dubai 24 Hour Endurance Race as his prize and then became a professional racing driver as a result.

GT Academy represents a particularly proud moment for Yamauchi: “It was a dream I had when I first started developing a driving simulator, especially because I was confident that one day it would come true. And when it really came to be in the 2008 GT Academy, it was incredibly exciting.”

Polyphony Digital switched lanes in 2009 with Gran Turismo on PSP. Speeding onto the handheld entertainment system with over 800 cars and 35 tracks, as well as multiplayer racing and player-to-player car trading, the depth and thrills of an authentic driving experience quickly became a fast favourite for gamers on the move.

The hotly anticipated Gran Turismo 5 arrived on PS3 in November 2010, once more shifting the realism of its cars and tracks into a higher gear. Over 1,000 cars featured, from classic automobiles and family runarounds to stunning supercars like the Bugatti Veyron. Real-life racetracks were painstakingly recreated, with classic circuits such as Germany’s Nürburgring featuring alongside the sort of inner-city tracks that dreams are made of, allowing drivers to race through the streets of Rome, London and Tokyo.

Building on the introduction of online play in its Prologue, the 16 player racing modes featured in Gran Turismo 5 were just the beginning. Special timed and seasonal events provided an ever-growing roster of challenges to enter, while the Course Builder mode allowed players to build their own raceways to share with the online community.

The real world of motorsport was brought ever more into Gran Turismo 5. Racing heroes such as Formula 1 driver Sebastian Vettel and NASCAR champion Jeff Gordon made cameo appearances, while popular motoring programme Top Gear featured its famous test track. And since its inception in 2008, GT Academy has gone from strength to strength, uncovering six winners across Europe and putting together a team that placed 2nd in the SP3 class at the Dubai 24 Hour Race.

Fifteen years on, it’s clear that Gran Turismo hasn’t just changed the face of driving games, but of the racing industry as whole. So it seems fitting to leave the last words to the man responsible for it all, Kazunori Yamauchi:

“I sort of consider Gran Turismo to be a movement. If the movement that involves GT leaves a mark in history, I think I’d be very happy.”

Previous: The Reasons Why Insomniac’s Fuse Isn’t Coming To Wii U
Next: Twitch TV App Now On Xbox 360