NeverDead Gets February 3rd Release Date, Plethora Of Screens Inside

Konami’s lift the lid on Rebellion’s NeverDead, a game that’s to see a release on January 31st in the U.S. and February 3rs in Europe. Japan gets it February 2nd. Screens galore and more details inside.

The game is centered around an immortal hero called Bryce Boltzmann who, with his partner Arcadia, works for an agency whose job is to deal with the demonic incursions.

“As the player is attacked by the various miscreants, Bryce can be torn limb from limb, but can simply reattach the parts to his body. Even when all limbs have been removed, Bryce can roll around as a head, looking to reattach his lost parts,” explains Konami.

“He can even use his amputated body parts as weapons, throwing arms into clusters of monsters, and still firing the attached gun, or lobbing his head into seemingly impossible areas, to gain access to new parts of the map.”

“For NeverDead, we’ve gone all out to change the approach the player takes in battle. Losing a limb is a mere inconvenience and Bryce’s physical skills allow a wealth of ways to take out the enemy – from close-range combat, to throwing limbs into clusters of monsters and shooting them remotely,” added game creator Shinta Nojiri of Rebellion Software.

“This adds a level of humour to the game that brings the world-weary main character to life, while players can revel in game worlds that can are fully interactive and eminently destructible.”

2 Comments on "NeverDead Gets February 3rd Release Date, Plethora Of Screens Inside"

id feel a bit robbed if i bought it and there wasnt a SP part of the game, however saying that i havent spent ...

@Foxton: Nice setup man! You'll be bombastic all the way once you get that surround sound going. But that dog...

@Nick: The way you put it, I'm halfway convinced. I might FINALLY get one for Christmas.....

@ExclusivesMostly: Yesir. You're not playing jokes, bro. My, my. That's gaming heaven right there.... 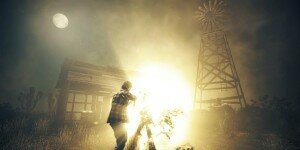