When it came to the Wii’s launch line-up, few games were as hyped to heck and back than the original Red Steel. Unfortunately, it did not live up to many players’ expectations just following short of being great. Now the developers have gone back to the drawing board and have completely retooled the franchise. Their end result is Red Steel 2, a game more about swords than shooting. Is Red Steel 2 on the cutting edge, or is it just a dull blade?

You play as a nameless swordsman seeking revenge after a gang captured him, dragged his body by a bike, and left him for dead. It turns out that the gang, the Jackals, have occupied a nearby town and are raising hell. It’s time to draw out a mythical katana to slay these savage foes and save the town. What there is of story in Red Steel 2 is very small. There’s first-person cut-scenes and the occasional cinematic showcasing your character’s acrobatic prowess. Other than that, the story is on the light side which may put some players off. 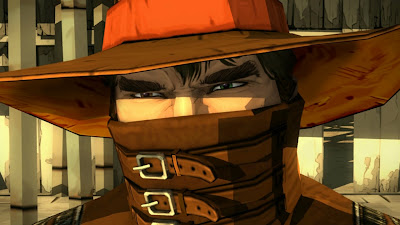 There’s seven chapters in Red Steel 2, and each has you completing missions around several unique and individual areas. There’s always a main mission to follow such as opening up a gate or lowering a bridge, and your task is easily marked on a map shown on the lower left corner of your HUD (heads-on display). Green arrows show which doorway you should enter through to reach the primary objective. Meanwhile, there’s side missions which are good for earning money that involve tasks like activating comm beacons, destroying Jackal trucks, and eliminating wanted posters placed around the city. Occasionally you’ll get into battle with the Jackal gang or even a boss character. The nice thing about this is that health regenerates fully once a battle is completed.

There’s a fair amount of different enemy types that are gradually introduced throughout the game’s duration. The earliest enemies are armorless goons who attack with either swords or guns that can be easily deflected with your sword. As you go on, you meet a hammering hothead whose weakness is on his backside, a chain gunner who isn’t shy about letting you meet each and every one of his bullets, and a lancer who loves showing off his agile acrobatics. Even the bosses are varied each with a different fighting style and attack pattern.

Combat-wise, Red Steel 2 only works with the MotionPlus attachment which for some bundles it is sold with. Might I say that Wii Sports Resort’s swordfighting has been eclipsed? The swordplay of Red Steel 2 works very well, it’s very fast and fluid, and most importantly it’s a lot of fun to do. You hold the Wii remote up like a sword, parrying bullets and attacks by holding the A button. Some opponents will signal where they’re going to attack, so it’s up to you to move the Wii remote accordingly to defend. Attacker signaling he’s going to strike vertically? Defend by holding the blade horizontally, and vice versa. 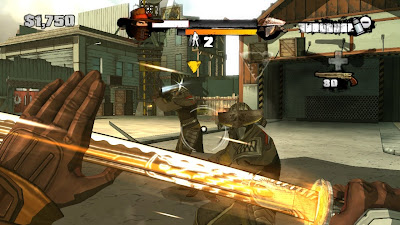 There’s a wide assortment of ways to attack with your trusty blade. You can stab enemies, do weak attacks, or make broad motions with your arm to perform strong blows. This is perfect for enemies wearing heavy armor that only strong attacks can penetrate. The same rules for defending works when attacking– that is, that if an opponent is holding up their sword vertically to parry, you attack vertically. Again, and vice versa. There’s a myriad of special finishers you learn, purchase, and acquire throughout the game. These are performed through different button combinations and Wii remote motions. One is unleashed by holding down the fire button and locking onto up to three enemies before releasing the trigger. This slows down time and blasts every baddie with a bullet that is within range. Others involve moving behind the foe with a horizontal slash, performing a heavy stab into an enemy’s heart, and leaping into the air before driving down your sword into an unfortunate bad guy.

When a foe is staggering after taking so many hits, that’s when the real fun begins. Well, fun if you’re demented like I am. You can take out an adversary using a variety of ways. An icon will appear over the foe’s head, signaling what you need to do to defeat them. Sometimes a simple stab will work or slap to the head with the brunt of your blade, but other times it’s more advantageous to use one of the aforementioned finisher moves. Not only do these moves earn you more reward money, but they are just damn cool to see even through repeated viewings.

Speaking of money, you earn cold, hard cash through battle as well as by smashing boxes, barrels, and other breakables. There’s also hidden tokens worth 5,000 and shoot-able tokens worth 3,000 that are cleverly placed throughout the game’s many locales. You spend your cash at one of three different shops, buying new finishing moves, hidden powers, guns and weapon upgrades, health and armor boosters, and much more. By the end of the game, you are one bad-ass swordsman. 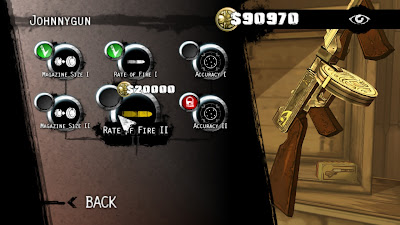 But the swordplay is only three-fourths of the equation. There’s also the gunplay which works awesomely as well. You just hit the fire button to ready your gun at any time, even mid sword fight. There’s four guns in total to purchase, and each one can be upgraded to fire faster, have more firepower, and have a quicker reload speed. You can fire a shot into an opponent’s knee, and while they’re dazed, go in for the kill! Unfortunately, guns become rather useless late in the game where every enemy can dodge your bullets effortlessly or they wear heavy armor. 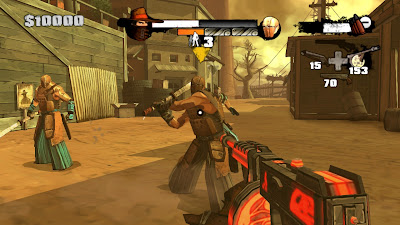 Red Steel 2 will take most players anywhere from 10-12 hours to complete. There’s three difficulties to choose from as well as a challenge mode where players can tackle any of the seven chapters, shooting and slicing for the high score– arcade-style. Although just another means to make more money, searching for all of the secret tokens is another great alternative to get the most out of the game.

Red Steel 2 supports a stunning cel-shaded art-style with beautiful vistas, towns, and other areas. Everything is colorful, crisp, and wonderful to look at. There’s an impressive mix of old West meets ancient East. However, load times are masked rather poorly through door-opening sequences. It can look quite pathetic seeing your character struggle to pound open a door for the fifth time. Regardless, it’s a necessary evil to keep the loading manageable in the grand scheme of things. Another potential problem for people is that there is no blood. Instead, enemies fall into dust. You can be sure this was to keep the game’s rating at a “T”. On the sound side of things, the voice work is passable albeit imperfect, and the soundtrack is appropriate if not a bit memorable. Tom Salta did another admirable job on this score. 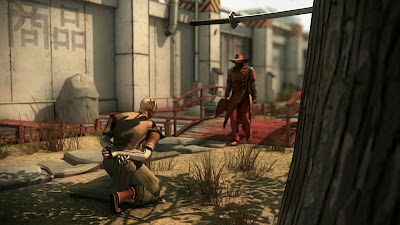 From the fast and frenzied swordplay to the fun and feverish gunplay, Red Steel 2 hits its mark splendidly and creates one wild ride from beginning to end. Yes, there could have been something on the lines of multiplayer, but what is here is a strong, solid foundation for further games or dare I say, sequels. For those of you who were disappointed with the original Red Steel, may you take its sequel as a personal apology from the developers. Tech-demo this is not.

Nice review Michael, I really want to play this game.

I was sick last week when it released, and due to some financial circumstances, I’m having to hold off on it for now.

I really did enjoy the first Red Steel, and I’m hoping I enjoy this one as well when I play it, and from your review, it sounds like I will!

First game that made me consider buying a Wii. Cool review.