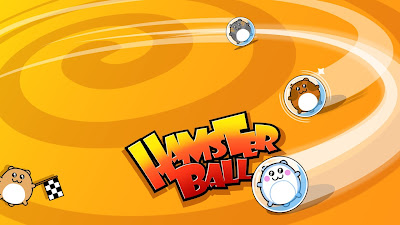 The ball-rolling genre was first made popular by a game called Marble Madness. Many imitators and clones have since come out including Super Monkey Ball and Kororinpa. Originally released on the PC in 2005, Hamsterball rolls its way onto Sony’s PlayStation Network with style offering new modes and fun multiplayer. Is this Marble Madness and Super Monkey Ball clone worthy of your digital dollars?

Hamsterball is made up of two different game styles. The first is Hustle mode where the game plays just like an extended version of Super Monkey Ball. You roll your little hamster through colorful and themed labyrinths, avoiding obstacles, trying to stay on the course without falling, and head toward the goal. Unlike Super Monkey Ball, Hamsterball is much more lenient with its punishment for falling off. Instead of having to start back over at the beginning of the level– which would be particularly cruel seeing as most levels take at least one and a half minutes to beat– you just are placed back near where you fell or died. There’s plenty of obstacles to get in your hamster’s way such as falling platforms, trap doors, crushers, spinning top enemies with spikes lining their bodies, and much more. In all, there’s around thirty-five different levels to explore each with different themes such as winter, gravity, night, circuit, and more. 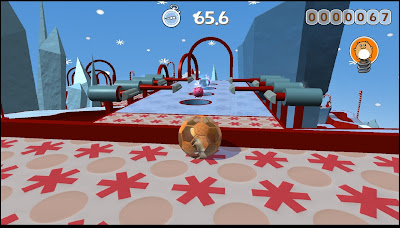 As you roll through the levels, there’s little piggy bank collectibles and stopwatch icons to gather. Not only do these increase your overall score, but the stopwatch actually acts as a score multiplier. These icons are usually hidden or placed in the most precarious of positions. At the end of a course, your score is tallied up based on much time is left on the clock as well as how many icons you collected throughout the level. 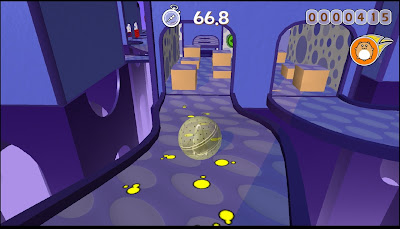 The second of two game styles is much more akin to Marble Madness. You roll your hamster ball on an isometric course with a fixed camera. Usually you’re rolling down a mammoth-sized structure on your way to the goal. On the way, there’s hidden locks that open up new courses for multiplayer. The time limits for the trial mode are much stricter than hustle, and because the camera is stuck in one angle, it can be hard to properly control your hamster in a speedy manner to complete a given level. However, with practice this becomes as natural as sleeping. 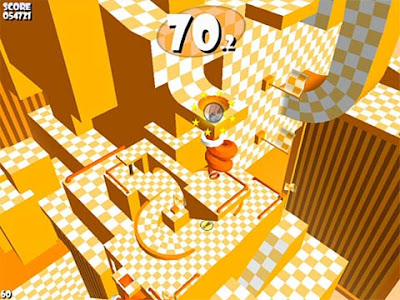 The multiplayer modes include race mode and sumo mode. Race mode is pretty self-explanatory as it has players racing against one another to see who can get through the course as fast as possible. Meanwhile, sumo mode plays out in one of several areans. The object is to hit the other players out of the arena. Each time a player is knocked out, the player who knocked them out scores points. The winner is the player with the most points at the end of the time limit. These modes are great fun with friends, and you can even set it up where you compete against up to five AI opponents or four real-life opponents in sumo mode.

Hamsterball doesn’t look too terribly different from its PC counterpart of several years ago. That isn’t to say it is bad either. It holds up well on the PlayStation 3 with vibrant colors and passable textures. And little touches help make the game look better than it otherwise would have. It’s cute seeing your hamster breakdance at the end of a given stage. The soundtrack is quite catchy with it being mostly jazz. Overall, the presentation is admirable for a download title that’s several years old.

All-in-all, for ten dollars, Hamsterball is a worthwhile addition to the wide catalog of PlayStation Network software. There’s plenty of levels in the three specific modes, the multiplayer is fun, the game isn’t too punishing so newcomers to the ball-rolling genre can jump right in, and mastering each course will take hours upon hours of practice to complete. For a great PSN game, roll on over to Hamsterball.

In The 8th Generation, Consoles Will Die
2010 Will Be “Really Great” For Nintendo Says Miyamoto