Have you ever liked something so much that you simply wanted to have more of it every chance you got, but at the same time wanted to push that very thing away from you? Maybe it’s that guilty pleasure junk food that’s just too good to pass up, but you know that it’ll do harm to your body. Perhaps it’s a relationship that you’re in, a partner that brings so much joy to your life that you can’t imagine living without them, yet at your last outing you barked: “get away from me you good for nothing little…” You get the picture I’m attempting to paint, and that’s exactly how I feel about Trine 2: Complete Story for the PlayStation 4.

The definition of “trine” is an aspect of 120° (one third of a circle), or a group of three, and in Trine 2, a stunningly-beautiful, 1080p, 60fps stereoscopic 3D platformer, you traverse along the game’s levels with three different characters to choose from:  a wizard that can conjure blocks and platforms, a thief with a bow and grappling hook, and a knight with sword, hammer, and shield. The 2D platformer is so pretty that I’d almost recommend it for its beauty alone, but that wouldn’t be fair to you or Frozenbyte, the game’s developer and publisher, so let’s talk about the love/hate relationship I’ve had with Trine 2: Complete Story, starting first with the reasons I simply cannot get enough of it. 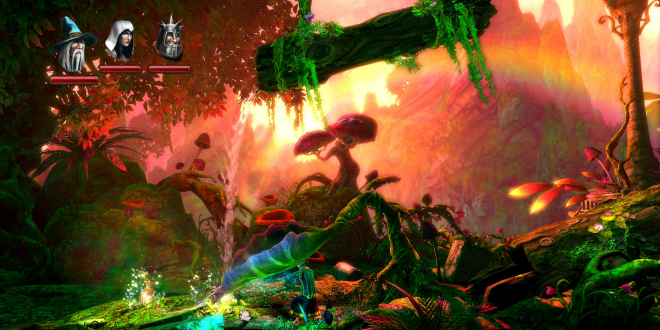 The beauty: Trine 2: Complete Story is easily one of the most beautiful games I’ve ever seen, and although it’s a 2D platformer, looking at the game’s vistas while solving puzzles and taking down baddies brings a nostalgic feeling to me. I can’t really put my finger on one thing because there’s so much going for it, but I’m simply loving the overall feel of the game — its colors, responsiveness, simplicity and style. And even when I’m not sure what to do, after gazing about for minutes – sometimes longer, I still feel the urge to continue because the game captivates you. Its levels are very diverse, too and well-designed. meaning you won’t see the same thing over and over again as you venture through the various stages. No, you’ll be wowed by beautiful vistas with every stop, every climb and every jump you take in Trine 2: Complete Story.

The multiplayer is also a beautiful addition to the game, with up to three players being able to join you — from anywhere in the world — strangers and friends alike, to take on the challenges at hand in the platformer. Another thing I really enjoy about Trine 2 is how trophies are dolled out. No longer do you only get the reward for passing a stage, instead Frozenbyte rewards players for doing strange stunts — a nice departure from the mundane offerings from other games. Oh, did I mention that there’s 50 trophies to collect? 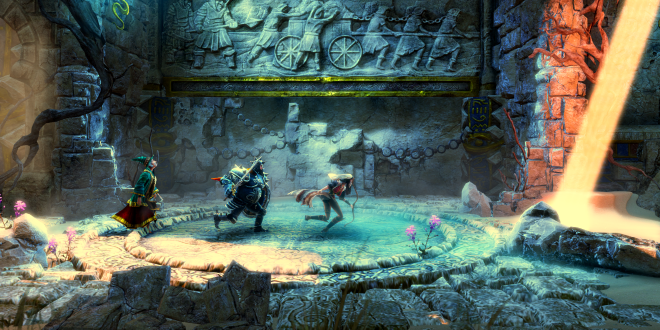 Also, don’t think your journey will come to an end in an hour or two — or even five. No, your $20 will be well-spent on the game as it lasts more than ten hours and includes over 19 levels. In addition, the PS4 version dubbed Trine 2: Complete Edition, includes a myriad of content not found of the original title.

And now for the things I hate:

So you’ll be playing, having a blast and suddenly come upon a puzzle that’s proving to be difficult to solve. Thing is, sometimes after laboring for long periods trying to understand what the heck you’re supposed to do, you realize that the puzzle wasn’t really a puzzle. Here’s an example of what I mean: I’m stuck at this stage trying to find my away across a wide gap but I have no way to get across. The hints feature of the game kicks in after I’ve been wondering about doing nothing for too long, but only tells me what to do to cause “fireballs” to hit some sort of trigger that’ll cause the gate to open. Nothing however on how to go across, so after some frustrations with the game, I decided to look online for help — only to find out that all I had to do was forge a box with the wizard, “throw” it high above and once it starts to descend, try to jump on the box and to the other side. I received no hints and that “puzzle”, if you can call it one, doesn’t seem like it was part of the scheme of things.

You’ll come across a lot of issues like the one I explained above, and you’ll get frustrated one too many times — so much so that you’ll feel like turning off the game. And yes, sometimes you will.

Trine 2: Complete Story’s save feature is also somewhat sporadic, meaning you’ll start a few checkpoints back when you turn it off and back on. The only way to counter this simple issue is by pausing the game while playing, go to “Game Options”, then “Save Game” and no progress will be lost.

So my relationship with Trine 2 complicated, yet, as I’m sure you can tell, my love for the game is above and beyond what I “hate” about it. And come it think of it, “hate” is a really strong word. Still, if you’ve ever been in a love/hate relationship, you’ll know that, a lot of times, the good outweighs the bad, and it’s no different here. The pleasures of Trine 2: Complete Story brings to naught its shortcomings, and I recommend that you delve into this one for PS4, because its one of the under-appreciated shinning stars of Sony’s new console.

Go ahead, fall in love with Frozenbyte’s treasure and feel good about doing so, because you’ll never want to say goodbye.

Purchase in US here. UK here.

Trine 2 can also be found on PS3, Xbox 360, PC and MAC, although not the Complete Edition.

A love/hate relationship. Have you ever liked something so much that you simply wanted to have more of it every chance you got, but at the same time wanted to push that very thing away from you? Maybe it’s that guilty pleasure junk food that’s just too good to pass up, but you know that ...

Summary : An amazing, stunningly-beautiful puzzle platformer with few faults. A must-have for PS4 owners looking for some indie love.