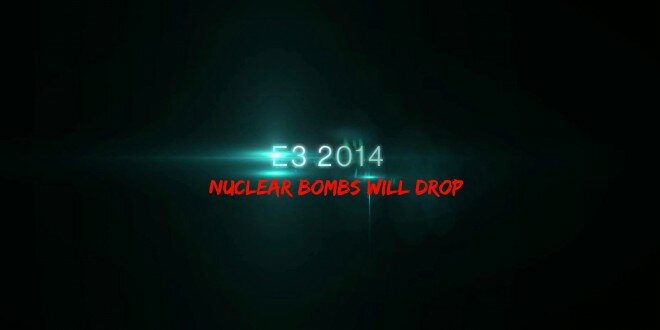 You think past E3 events were insane, and there’s no reason to cast doubt on your judgement. But judgement day itself will happen in 2014, next week to be exact, when the gaming world will be obliterated by the megatons set to drop during the press conferences of Sony, Microsoft and Nintendo — and the major publishers, too.

It’s a dangerous world out there, but Games Thirst has been declared safe by the Government of Gaming, and we’ve been given the rights to carry all the latest and breaking news events right here. Check out event dates for all the major players below.

ALL TIMES PDT. SCHEDULE MAY CHANGE.

Pre-Show/Green Carpet (Monday, June 9 at 9am)
New this year, we are inviting fans to be part of the excitement at the Galen Center in the final minutes before the show kicks off. Tune in to our live stream on Xbox.com or Xbox Live for an exclusive pre-show featuring sneak previews and interviews with our development partners and celebrity fans as they arrive at the Galen Center and walk the green carpet.

Xbox: E3 Briefing Post Show (Monday, June 9 at 11:15am)
Tune over to Twitch.tv/xbox immediately following Xbox: Game On for a live, fan-centric “post-game show.” Xbox leaders and developers seen on the Media Briefing stage will talk more about what was just shown and will answer questions from Twitter and the live studio audience. Guests include Phil Spencer (Head of Xbox), Chris Charla ([email protected]), Yusuf Mehdi (Microsoft Devices & Studios), Ted Price (Insomniac Games), and Bonnie Ross (343 Industries). Details on how to submit questions for the Post Show will be revealed soon.

[email protected] on Twitch (Tuesday through Thursday during E3 show hours)
While the Xbox E3 booth is open, we’ll be broadcasting what you want – straight gameplay. Every day, we’ll focus on two different [email protected] titles, with many of the developers stopping by to chat with viewers. We’ll also be taking many other titles over to the Twitch E3 booth throughout the week, so keep an eye on the main Twitch channel as well. The full broadcast schedule will be revealed at the beginning of E3 week.

Nintendo Treehouse: Live @ E3
This year, Nintendo will offer fans a deeper look at Nintendo’s biggest games of E3, with information directly from the source. The “Treehouse,” the Product Development department at Nintendo of America, will provide in-depth game demos live and unscripted from Nintendo’s booth. This new program will be live streamed during all hours of the E3 show. Fans can get settled in, open their browsers and experience the Nintendo games at E3 like never before.