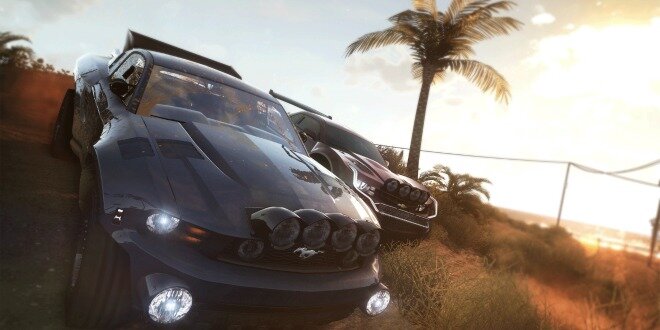 The Crew to Launch in Fall 2014, Premiere Gameplay Trailer

Ubisoft’s The Crew will indeed release this year (we have a trailer inside showing fresh gameplay), but the game is apparently laden with some nasty  micro-transactions, needs a persistent internet connection to work, and features other troublesome features. We’ll update you as more information comes in, but in the meantime, enjoy the trailer below, alongside the press release and some new screens.

The Crew is a revolutionary action-driving game that takes gamers on an exhilarating ride throughout a massive, open-world recreation of the United States, brimming with exciting challenges and populated by other real players.

The Crew’s worldwide premiere gameplay trailer, released today, shows four cars, each with different tuning specs and riding in an iconic region of the United States, forming a crew to continue their journey together across the living, breathing open-world.

From April 8th, players will be able to win exclusive rewards through the Golden Plates treasure hunt. Golden Plates are license plates hidden within the game assets (screenshots, trailers, etc.) that have already been revealed or that will be revealed until the launch of The Crew. At launch, submitting the license plate code into the dedicated website hub will unlock in-game rewards, goodies and mystery rewards.

The Crew is now available for pre-order in two different editions for Xbox One and PlayStation 4. The Limited Edition will grant early access to rides that will prepare gamers for any road—and off-road—conditions. Players who pre-order this edition will receive early access to the BMW Z4 sDrive35is, Mini Cooper S, and Dodge Ram SRT-10 and their respective sets of full custom and performance parts. The Muscle Edition, which can only be pre-ordered at GameStop, will include all early unlock content from the Limited Edition and will also grant exclusive early access to the 2015 Ford Mustang GT. Both Editions include 10,000 bonus Crew Credits. Players can pre-order The Crew for Xbox One and PlayStation 4 at their local retailers.

ps4 the crew release date the crew The crew trailers the crew xbox one the crew 2014-04-11
Ernice Gilbert
Share !

Tagged with: ps4 the crew release date the crew The crew trailers the crew xbox one the crew

Previous: The Last of Us Remastered For PS4 Gets First Trailer
Next: Weekend Quencher 12/04/14 – Next Gen Mire Edition

The Crew gets brand new trailer