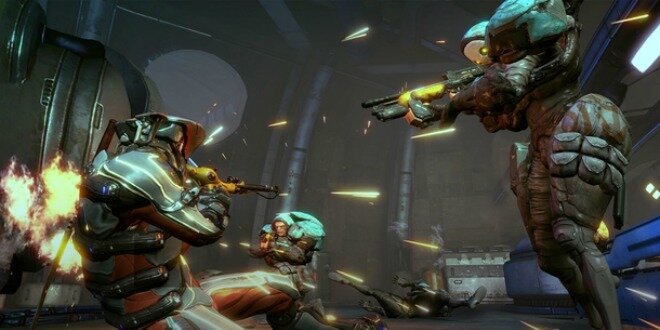 Digital Extremes’ has announced that its free-to-play PC game dubbed Warframe, will be released on PS4.

The former PC-exclusive has been confirmed as a PS4 launch title.

Warframe’s creative director Steve Sinclair told IGN that, “Sony caught wind of [Warframe], and said, ‘hey, what do you think of bringing it over to PlayStation 4?’, and we were very surprised to hear that.”

Sinclair added that Sony has been “incredibly supportive”, and as an independent developer, they get to keep all their IP rights, giving them creative freedom to move in any direction they choose. “We don’t have to necessarily get into bed with a publisher and sell away our ideas and kind of lose our creative vision for the game,” he said.

The PS4 was also spoken highly of, with Sinclair revealing that the console has been easy to use, and that Warframe runs at 1080p on the machine.

I don’t want to speak disparagingly about any existing or prior platforms, but we showed Warframe for the first time to our entire studio, and everyone had their jaws on the floor, how 1080p, silky smooth and beautiful it was.

So, I’m really, really enjoying working on the machine.

Expect to hear more about Warframe on PS4 at E3.

Previous: Injustice: Gods Among Us 1.04 Patch Notes Released, Fixes Batgirl’s Camera Issues And More
Next: Xbox One Will Cost $399 And PS4 $349, Analyst Predicts