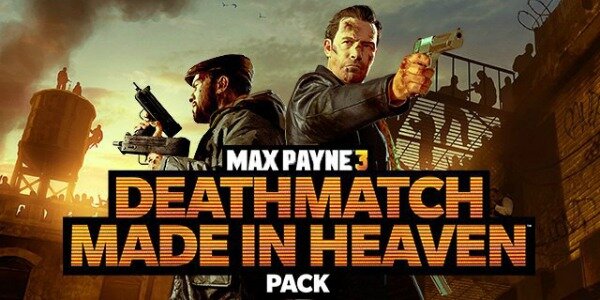 Rockstar Games has detailed the Max Payne 3 Made in Heaven DLC.

The DLC comes ready with four new multiplayer modes, they include:

You and your teammate each begin with a PT92 handgun, sixty rounds of ammunition, three pain killers and an itch to take on a wave of enemies.

The longer you can survive the bloodthirsty masses, the more handsome your score – with various modifiers to aid your assault, rewarding you for superb Payne style combat and tactics. Using Bullet Time and Shootdodge, registering headshots, and dropping a target without taking damage will all earn you big bonuses and bragging rights.

Equipped with super strong, super light armour and unlimited stamina, Saci must “Turn” the other players to get them onto his team.

Armed with a Stun Gun, a few Flash Bangs and a weighty melee strike, the seemingly unstoppable Saci adds players to his side with each kill, turning them to his cause. The round ends when the timer runs out or one player is left unturned.

Puts a spin on traditional Deathmatch and rewards you with more XP for taking advantage of Max Payne 3′s Vendetta system.

To climb the leaderboards and earn the most XP, you must trigger and survive as many Vendettas as you possibly can.

Like the classic Deathmatch, a kill can earn you a single point, but if you can move quickly and take out multiple targets within a short period of time, you will earn up to nine points for that same kill.

The match starts like a traditional Deathmatch, rewarding you with one point for the first kill that you tally, but now a kill timer will appear next to your score illustrating how many points your next kill will be worth. Over time this kill clock will return to zero, so move quickly and register those victories.

Deathmatch Made in Heaven, the final DLC for Max Payne 3, will be released for all platforms on January 22 – although European PS3 gamers must wait until January 30. Rockstar Pass owners will receive the new content for free, with everyone else having to part with 800 MS Points / $9.99.