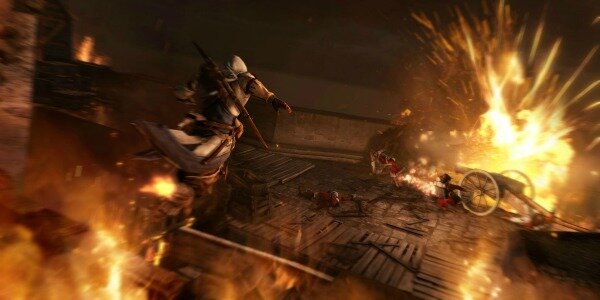 The PlayStation Blog revealed that the Playstation 3-exclusive missions of Assassin’s Creed III will revolve around the most infamous traitor in American history, Benedict Arnold.

As the Blog explains, “Benedict Arnold’s secret plot to betray West Point and sabotage the American Revolution earned him the ultimate mark of infamy: a name that will forevermore be synonymous with deceit and treachery.” And the four mission arc surrounding him, exclusive to PS3, deals with this “most reviled turncoat.”

The missions start “with a special request from George Washington” having to do with bringing to light the very plot at West Point Benedict Arnold was so heavily involved in. “Across four missions, our character, Connor, will have to flush out Loyalist spies and work undercover for Benedict Arnold, culminating in a full-blown assault on West Point that Connor must halt at all costs.”

Assassin’s Creed III’s scriptwriter, Matt Turner, has promised this story arc to be more realistic than the alternate history take of “The Tyranny of King Washington”, including actual dialogue thought to have been spoken by Arnold and those around him.

Assassin’s Creed III is coming out on October 30 in North America and 31 for Europe, on the Playstation 3, Xbox 360 and PC. A Wii U version is planned for the console’s launch.

Previous: An Origin account will be required to play EA games online on the Wii U
Next: Games Thirst Medal Of Honor: Warfighter Review Up Tonight, Launch Trailer Inside