Rumor rocking gaming’s web today has a member of the Se7ensins forum named iHC James taking screens of a Treyarch developer friends list using a dev kit Xbox 360 that had access to the partner-net sector of Xbox Live, which apparently reveals a group of Treyarch employees all playing a game called….”Project Iron Wolf”.

According to their status, the devs were playing Team Deathmatch on an unknown map which was later confirmed to be Nuke Town from Call of Duty: Black Ops. How iHC James was able to rectify this is unclear, however if true, it suggest Treyarch’s using Black Ops maps to test early code of the game. 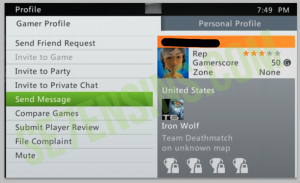 The water might be polluted, so drink with caution, but it would come as no surprise to me, and shouldn’t to you either, if indeed Treyarch’s working on its next Call of Duty game. They should be halfway there already.

Like Gamesthirst on Facebook to win a PS Vita with Uncharted: Golden Abyss free of charge! Details here.