Kratos is back to get his hard-sought and hard-fought vengeance on the gods and in particular, the king of gods, Zeus. In the end there will be chaos, and God of War III promises to be tie up the trilogy nice and tightly with bigger battles, bigger bosses, more challenge, and much more to do. Does God of War III deliver on all of these promises?

In the original God of War, the previous God of War, Ares, tricked our anti-hero Kratos into murdering his own family in cold-blood. By opening Pandora’s Box, Kratos gained the power to kill a god, and he consequently did so, defeating Ares. God of War II had Kratos, the current and future God of War, being killed by Zeus. Coming back from Hades to exact his revenge, God of War III takes place directly where God of War II left off. Kratos, with help of the titans, are attempting to scale Mount Olympus to destroy Zeus, king of the gods. 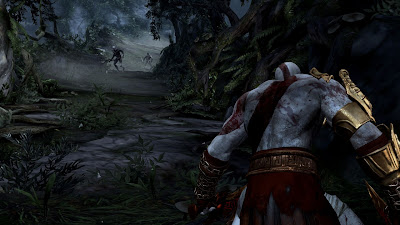 God of War III has players controlling Kratos through relatively linear paths and passageways, slaying legendary creatures and monsters, on his quest to murder his father, Zeus. That isn’t to say the game is totally linear. There are side areas with hidden treasures to find containing items boosting Kratos’ health, magic, and item power as well as treasures holding red orbs. Not only are these orbs found through opening certain treasure chests, but they’re also gathered through defeating enemies. These orbs are used to power up Kratos’ weapons and abilities. As they grow in power level, new moves and increased damage are given to Kratos.

Kratos will need that power for combat, too, as the battles are fierce and visceral. Kratos has a wide selection of moves and attacks in his arsenal including blades, cestus, and whips. One button takes care of weak attacks while another is all about strong attacks. Weak attacks are fast to strike while strong attacks leave Kratos open for damage if he doesn’t time them just right. Kratos can also grab enemies with the circle button and unleash his ferocious force onto them. When an enemy is weakened enough, a QTE prompt will appear over their heads. When engaged, the player will have to hit the button or buttons shown on the screen within a time limit in order to decapitate/behead, violently rip to shreds, tear off limbs, etc. While these QTEs do get the player more active in the combat, I can’t help but feel that the game is stuck in 2005 when QTEs were still all the rage. Nowadays, they just come across as tedious to constantly waggle the analog stick, mash a button or two, or hit the proper button that appears on screen or else die a gruesome death. Thankfully, there’s plenty of checkpoints to make repeating sections less arduous and annoying. 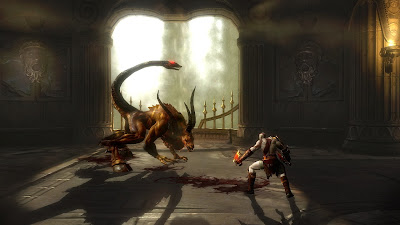 Combat is a big focus of the God of War series, but that’s not all you’ll be doing. Kratos will be exploring ancient ruins, palaces, climbing on top of gigantic titans, and even the depths of Hades itself. Sure, there’s lots of times where Kratos will enter a room and be trapped inside until he defeats all of the enemies inside, but there’s also a lot of puzzles to solve. Moving blocks around is a norm for most action-adventures, and those are definitely there. Regardless, there’s some really cool ideas implemented such as a novel perspective puzzle, a puzzle where steps will align themselves when the camera is stuck in a given position. There’s also a labyrinth where you can twist the entire maze ninety degrees to solve complicated platforming perils.

Apart from the interesting puzzles, there’s also a lot of awesome set pieces thrown in for good measure. Battling in a city with a giant titan in the background overlooking your progress to climbing up a gigantic chain to the heavens. Plus, who doesn’t love fighting seamlessly atop a gigantic titan’s arms, swinging around its enormous body, entering inside its core, and causing all Hades to break loose? The start of the game is just this. It starts with a bang. Kratos is climbing up the backs, arms, and stomachs of the titan Gaia as they struggle to climb to the top of Mount Olympus. Meanwhile, Zeus’ last line of opposition, a cavalcade of gods including Poseidon, Helios, and Hades enter the fray, showcasing their patented line of resistance. The first chapter of the game is all about scaling the mountaintop atop Gaia, and taking on Poseidon. 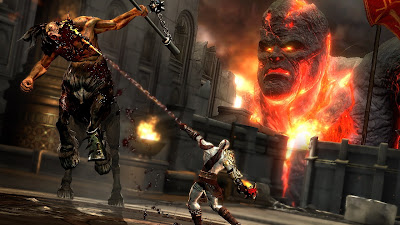 Just like God of War II, there is a fair amount of boss battles to participate in… whether you want to or not! Boss encounters are usually multi-part fights that take place in wide, expansive arenas. Each boss has their own specialized attack patterns for Kratos to dodge. Then, when they’re wide open to attack, Kratos can get a few hits on them with his blades or other attack weapons. When weakened enough, the real fun begins! A prompt will appear over the boss’ head allowing Kratos to enter a QTE session, having the player hit several button and analog prompts to gruesomely take out the foe or at least make them remember why they shouldn’t be messing with the God of War!

Of course, Kratos isn’t alone in his quest of vengeance. Along his journey, he’ll acquire new goodies, tools, and weapons that are mapped to the L2 button and assigned to one of the face buttons. There’s a bow with fiery arrows, perfect for giving enemies a bad case of sunburn, and it also works on dry batches of bristles, great for burning them to open up new paths. Additionally, there’s the head of Helios that can blind enemies as well as illuminate darkened areas. Finally, there’s the boots of Hermes that on specially marked walls can allow Kratos to run up them. In addition, Kratos will earn new weapons such as a life-sucking whip and power-punching pair of cesti taken directly from the universe’s strongest man which can be easily cycled with the d-pad. 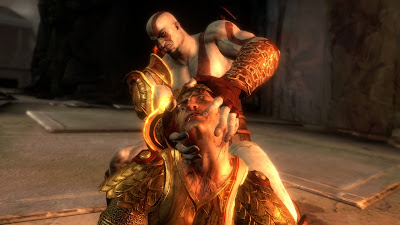 God of War III isn’t necessarily a long game. The main quest will take anywhere from 8-10 hours to complete. There’s multiple difficulties to try out including a Very Hard setting. Simple button mashing for combat won’t work here. You need to dodge and block attacks frequently to pass the many trials put before you in this mode. Once the game is beaten, a new Challenge of the Gods opens up. This mode pits players in various themed battles with a set condition for victory such as not getting hit or defeating all of the baddies in the given time limit. Additionally, new costumes are unlocked to use. These are fun to use, but the void the player from getting any trophies. As for the trophies, they can be obtained in one playthrough, but getting 100% should take most players upwards of 20 hours at the very least.

God of War III is a technically impressive game. It may just be the most beautiful HD game in existence. It runs without any slowdown, framerate hiccups, or anything of that regard. It runs at a silky smooth framerate. That said, the game isn’t without its share of glitches. A few times I somehow fell through the floor and died at certain areas of the game. This issue is far from common, but it is there. Meanwhile, the voice work continues to astound. It’s fantastic, and it really has a dramatic feeling to it. The music is also very powerful with crescendos when the action gets particularly heated, and some truly haunting, goosebump-giving pieces of music. 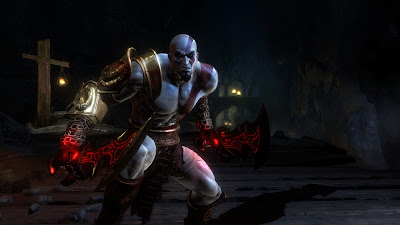 Ultimately, if you didn’t enjoy the previous God of War games, God of War III probably won’t make you a believer in the franchise. There’s not much different from past titles to warrant a purchase. That said, fans of God of War and God of War II will find a lot to love here. Everything is bigger, better, and bolder than before. By the Gods, this game is great, too.